Dying in the Wool by Frances Brody 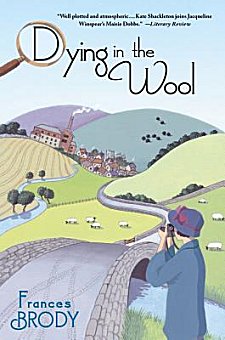 Normally a peaceful Yorkshire mill town, the only exceptional thing to have happened in Bridgestead is when mill owner Joshua Braithwaite went missing and was never heard from again. Now Braithwaite's daughter Tabitha is getting married, and she wants to try one last time to find her father.

She turns to Kate Shackleton, a friend since their Voluntary Aid Detachment days during World War I. Kate's husband was listed as missing in action/ presumed dead during the war, and since the Armistice, she has been having a bit of success finding missing husbands for local women. But once Kate turns her skill to the puzzle of the missing mill owner, she discovers that someone is willing to kill to keep the secret.

This first book in the Kate Shackleton series takes place during the 1920s in the Bradford and Leeds area of Yorkshire. This area was the heart of the cloth trade in England, and I loved the fact that each chapter began with a textile term. I had no idea that so many words and phrases from the manufacture of cloth had made their way into everyday speech.

Kate Shackleton is young and independent, thinks nothing of driving herself anywhere she wants to go, and asking questions wherever she thinks they should be asked. Being advised that she needs help with some of her investigative work, Kate hires former policeman Jim Sykes, and it's fun to watch the two of them get used to working with each other; Kate not being used to having an employee, and Jim not used to such a Modern Woman. The person suggesting that Kate get help was wise because this case developed into a very complicated one that kept me guessing at every twist and turn.

I really liked the time period, the setting, and the plot of Dying in the Wool, but the characters didn't quite come to life as I'd hoped they would. Kate, Jim and Tabitha seemed to have extra measures of British reserve that kept me at a distance the entire time I was reading. Even so, this is a good, solid mystery, and I will be visiting Kate Shackleton again to see if she's warmed up to visitors.