Valley of Ashes by Cornelia Read 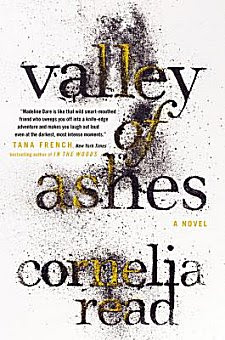 First Line: When we first moved to Boulder, I was entirely too happy-- a state of being so rare in my experience that I found it rather terrifying.

Madeline's husband Dean found a job in Boulder, Colorado, and while he spends a lot of his time on the road as a salesman, Madeline is a stay-at-home mother of two toddler twin girls, India and Parrish. Her world couldn't be any more different from the life she knew in New York City.

At first Madeline is ecstatically happy, but as exhaustion wears her down, she becomes dissatisfied. Her world has shrunk to an endless round of taking care of two demanding babies, a house that is never clean, and a husband who, when he is home, is more and more critical of her.

When her mother and her friends tell her that she needs to do something outside the house just for her, she manages to get a job writing restaurant reviews for a local newspaper. The editor loves her writing and asks her to attend a neighborhood meeting in which fire department officials will advise residents on how to defend themselves against an arsonist who's been torching buildings in the area. The subject fascinates her, and Madeline becomes friends with one of the arson investigators. She even begins to do a bit of investigating on her own, but when the fires turn deadly and the stakes disastrously personal, Madeline finds that she needs every atom of courage she possesses to keep those whom she loves safe from harm.

When someone asks me to list my favorite writers of any genre, Cornelia Read is always in the top tier. Her creation, Madeline Dare, is the best blend of smart alecky, brave vulnerability that I've ever encountered. At first, I was hesitant with this book. Madeline as a mother? I chose not to procreate for a very good reason: I am not child friendly. Read made me forget all that as Madeline hauled her children all over town in a red wagon, as she fixed them broccoli, and made sure she packed the sippy cups and extra diapers. Madeline was a natural, and she made me forget that I'm not.

I cheered as she found the job at the newspaper so she could do something she liked to do that didn't involve babies... something that made her feel better about herself. She needed that because as the pages turned I had grave misgivings about the way her marriage was going, and so did her friends in Boulder.

The mystery concerning the arsonist is an intriguing one, but this book is about so much more than arson. It's about motherhood and marriage, it's about friendship and tragedy and grief. It's about standing up for yourself and those you love. There are many things in life that can turn to ash within the blink of an eye. As Madeline deals with all these issues, I was intensely emotionally involved. This sassy-mouthed woman with a big, big heart is one of the few fictional characters who can make me cheer, laugh, gasp, and cry within the space of a very few sentences.

If I didn't know better, I'd swear that Cornelia Read dips her pen in her own heart's blood as she writes. This is beautifully written, emotional, soul-searing and laugh-out-loud funny fiction at its very best. It's anyone's guess as to whose soul is bared the most throughout the book, Madeline's or Cornelia's, and it really doesn't matter. What does matter is that I want more. Lots more.