The Crowded Grave by Martin Walker 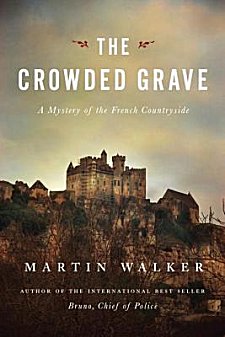 First Line: For once, the chef de police of the small French town of St. Denis was carrying a gun.

It's spring in St. Denis, and although Chief of Police Bruno Courrèges would like to spend it taking morning walks with his Basset hound Gigi, spending even more time with his lady love Pamela, and eating and drinking with his many friends, it's not meant to be.

An archaeological team is in the area looking for Cro-Magnon and Neanderthal remains. Instead the team finds a skeleton with a watch on its wrist and a bullet in its head. Naturally it's up to Bruno to solve the case, but he also becomes involved with a summit being planned between France and Spain. If those two things weren't enough to keep him occupied, animal rights activists are attacking local foie gras producers,  and a brand-new (vegan) magistrate is eager to make a strong impression.

When the professor in charge of the archaeological dig goes missing, Bruno begins to suspect that the past and the present are entwined in a very dangerous way... a way that will take him deep into Europe's dark history of terrorism and counterterrorism.

As with all the other Bruno Chief of Police books, Walker brings the Perigord region of southwestern France to life. With these books, you are not only gifted with an intriguing mystery and wonderful characters, the food, the drink, and the history of the region is skillfully woven in to create a complete tapestry. Solving mysteries with Bruno is armchair travel detecting at its very best.

In this fourth book, Walker uses the background of the Basque freedom fighters and the Spanish Civil War to add a heightened level of suspense and danger to the plot. For comic relief, we have the blundering new magistrate who learns just how talented the villagers of St. Denis are when it comes to letting an official know she's overstepped her bounds.

Bruno's love life also continues to be a concern. He has no trouble finding strong vibrant women to fall in love with, it's finding the one who wants to marry and have children that's his problem-- and if there's one character in crime fiction who's perfect for marriage and children, it's Bruno.

I will warn you that there is a scene in the last fifteen pages that could be very distressing, and I know that it had to be very difficult for Walker to write. However, the scene is not graphic, it's not gratuitous violence, and it's perfectly in keeping with the plot. If, as I am, you're a fan of these books, you'll be saying goodbye to a friend.

But life goes on, and I wouldn't miss the next installment of Bruno's story for the world.