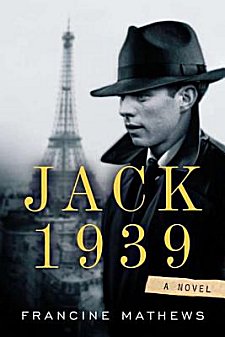 President Franklin Delano Roosevelt has secretly decided to run for an unprecedented third term in office. He knows that Europe is on the brink of another world war, and he believes more in his own abilities to carry the United States through than he does in any of his likely successors. But he does need someone he can trust to find out what the Nazis are up to. Since the United States does not have an intelligence service (spies), Roosevelt chooses his own-- twenty-two-year-old John Fitzgerald Kennedy.

The young Jack Kennedy is in ill health more often than not, and of all the Kennedy children, he's considered to be the least promising, the black sheep. But he's also the son of Roosevelt's ambassador to Great Britain, he's a well-traveled young man with a diplomatic passport, and he knows many people. Roosevelt sees something in Jack, something that reminds him of himself. Jack agrees to Roosevelt's proposal, and in the spring of 1939, he's off to Europe aboard the Queen Mary, ostensibly to gather material for his senior thesis at Harvard. Only Roosevelt, Jack, and the president's most trusted bodyguard know that Jack is looking for the people responsible for a flood of German money into the United States-- a monetary tsunami intended to buy the 1940 presidential election... an election that Hitler is determined Roosevelt will lose.

Former CIA intelligence analyst Francine Mathews has crafted a terrific blend of fact and fiction that drew me in from the very first page. I loved how Roosevelt skillfully tapdances around the slimy, secretive J. Edgar Hoover, who spends most of his time trying to compile blackmail-worthy dossiers on all the powerful people in the country. When the action is in Europe, time and time again the British pop up with some needed help, showing us all that they know plenty about the spy business.

But of course, the focus of the book is on the young Jack Kennedy. His constant, mysterious illnesses have made him unafraid of death and determined to live fully during the time he has got. He knows how to think on his feet, how to observe, and he learns very quickly. He falls in love with a beautiful woman during the Atlantic crossing aboard the Queen Mary, and he shadows Diana Playfair from place to place until they finally hook up to get the information that Roosevelt needs. And when the information begins to fall into place, Jack learns that his father, Joseph P. Kennedy, is right in the middle of things. Which is going to be more important to Jack-- his mission for Roosevelt or his family's integrity?

I found Jack's love interest, Diana Playfair, too cold and brittle to ever really care about, so that part of the story palled a bit for me. Besides the scenes in which Roosevelt shone, the best often showed Jack interacting with his brothers and sisters. At times it seemed that Mathews' portrayal of Rose Kennedy and Jack's elder brother Joe was too one-sided, but I have read a lot about the family, and everything that's said about all the Kennedys in Jack 1939 is pretty accurate. I think Rose and Joe Jr. were painted with the saint brush after their deaths: Joe the Golden Boy, killed too young and not allowed to fulfill his promise, and Rose, the bereaved mother who lost two sons so tragically in the 1960s.

While I'm speaking of the Kennedys, one scene that did not ring true for me at all was the scene at the end where Jack lays down the law to his father, Joe. No way, no how would that scene ever happen. However, this scene and the character of the icy Diana Playfair were not enough to ruin my enjoyment of this book.

This was a fun read from beginning to end, and I enjoyed Mathews' skillful blend of history and the storytelling art. Seeing a young JFK spying his way around a Europe on the edge of war, as a young man falling in love, learning how to use cyphers and radios, being followed by a psychotic Nazi killer, and getting himself out of one close call only to fall right into another... I read this book in a little over a day, and when I came up for air, I had a big smile on my face.