This is a question I've been asking myself on and off for several weeks now. What are "auto-buy" authors, you ask? They are the crème de la crème-- the authors that, when you hear they've got a new book coming out, you know you're going to buy it regardless what it's about. They're the authors you recommend to anyone who asks-- or anyone who'll listen. You devour their books with a passion... and then regret that you read them so quickly and now have a long wait till the next one. That's what an auto-buy author is.

As I compiled my list, I discovered that it had to be refined. There are some authors who write several series, but I may only be passionate about one, so I can't say they're auto-buy; I've got to find out to which series the new book belongs.

As I look at the authors' names I've scribbled down on a small piece of paper, I see that they all have things in common: their plots, their characters, and their settings all blend into potent brews that i simply cannot resist.

Here, for good or ill, is my list of auto-buy authors (in no particular order). Perhaps some of mine are on your own lists as well.

I fell in love with Deborah Crombie's books from the very first one. She's written fourteen books in the Duncan Kincaid/Gemma James series. This American's a bit unusual in that she lives in Texas but writes about England. When my British husband asked me for a book recommendation and I suggested Crombie, I was interested to see what he thought of them. Denis gobbled them up even quicker than I did, which put an insider's stamp of approval on her books. (Not that it matters; I'd keep on reading them anyway!)

The settings she chooses and the stories she tells are marvelous, but what puts her on my Auto-Buy List is her characters. Duncan and Gemma's relationship grows and changes over the course of the books. They are real people facing real problems. Midway through the series, they stopped being fictional characters to me and became living, breathing people.

Way back when, someone recommended Nevada Barr as an author I might enjoy. I've now been with her through seventeen books featuring National Park Service law enforcement officer Anna Pigeon.

In her line of work, Anna has taken me back and forth across the United States visiting several of our wonderful national parks and recreation areas. Wildlife and the outdoors both mean a great deal to me, and Anna allows me my nature fix in her own inimitable way.

Like all memorable characters, she never remains static. She changes and adapts as a result of all her experiences, and I love following her progress through each book.


Betty Webb writes two very different series, and both of them are on my Auto-Buy List.

Her seven-book series featuring Scottsdale, Arizona private detective Lena Jones is hard-edged and tackles some very important (and sometimes little known) issues. Lena opens my eyes and my heart, not only to the cases she solves, but to the state in which I live, and to Lena herself and her troubled past.

For the lighter side of Betty, I've come to love her Gunn Zoo series featuring Teddy Bentley, a zookeeper living on a houseboat on the central coast of California. With Teddy, I get to laugh and to learn about some fascinating animals.


Craig Johnson writes the wonderful series featuring Sheriff Walt Longmire of Absaroka County, Wyoming. My love affair with his writing began from almost the very first page of The Cold Dish and has grown stronger through each of the seven books that have followed it.

Once again, the stories and the setting are vivid, but Johnson's ensemble cast is absolutely sublime. Humor, heartbreak, honesty and integrity. If I'm ever kidnapped, I want Walt Longmire coming to get me. I know he'd get the job done. My only regret is that he's fictional and I can't vote for him!

Through eight books set in 1970s Laos, I've come to adore Dr. Siri Paiboun, the country's septuagenarian National Coroner, his able Nurse Dtui, and his morgue assistant Mr. Geung. I get to learn about life in a poor Southeast Asian Communist country while I'm trying to find out if I'm as smart as the wily Dr. Siri in knowing what's really going on.

Cotterill's newest series is set in rural southern Thailand where Jimm Juree, a former crime reporter for the Chang Mai Daily Mail, has moved with her wacky and wonderful family. I'm used to reading books set in the cities of Southeast Asia, so the chance to learn about rural Thai life is fun.

The strength in both series? Cotterill's wonderful ensemble casts of characters, his honesty and humor, and his love for his creations.

Cynthia Harrod-Eagles does write a mystery series featuring Bill Slider, but it's her thirty-four volume historical fiction series called the Morland Dynasty that I'm nutty about.

The series follows one family-- the Morlands-- from the time of Richard III in 1434 and is supposed to end with World War II. (Right now the series is in the 1920s.) Earlier volumes have floorplans of Morland Place (just outside York) showing how it changes with each generation. Harrod-Eagles brings the history to life through her generations of characters, and each book has given me characters to love or to hate with equal intensity.

As I've sat here typing this post, I've been adding more Auto-Buy Authors to my list, so this shows all the signs of turning into a series. I'm going to end this installment of my list with two authors whose books I'd automatically buy... if they were still writing. 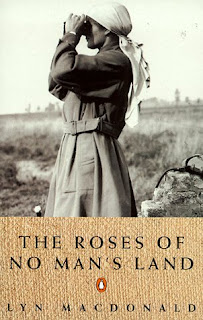 In the 1980s and 1990s, British author Lyn Macdonald spent thousands of hours researching written first-hand accounts of World War I. She then spoke to as many survivors of the horror of that war as she could find, capturing oral history that is beyond price. Her books--1914, 1915: The Death of Innocence, The Roses of No Man's Land, To the Last Man, Somme, and They Called It Passchendaele--are among the very best I've ever read about military history because they're not about kings and generals. They are about the common soldiers trying to survive in the trenches; they are about the nurses and doctors and ambulance drivers who risked their lives to save others. To read these stories... this history... told in these people's own words for me was, quite simply, incredibly powerful and mind-altering.

Suzanne Massie wrote two books about Russian cultural history that I'll only turn loose of once someone's pried them out of my cold, dead fingers. Like Lyn Macdonald, if she were still writing, I'd still be buying.

Land of the Firebird: The Beauty of Old Russia brings pre-Revolutionary Russia to aching, wonderful life. As I read, Massie created the most vivid pictures in my mind-- pictures that were also accompanied by sounds and smells. I could also feel the cold, and touch various surfaces in beautifully furnished rooms. It's rare that a book affects all my senses to such a degree, and when I find one that does, I get my hands on it and keep it close.

What is so wonderful is that Suzanne Massie did it not once but twice when I bought my copy of Pavlovsk: The Life of a Russian Palace. I've walked into many old houses that "spoke" to me. Massie took me through a splendid palace and let me listen as it told me its secrets. It's a journey that I will never forget. So many of the Russians Massie interviewed for this book quoted a line from Dostoyevsky-- "Beauty will save the world." After reading about Pavlovsk, I believe that very well may be true.

It is my hope that you'll give this some thought and leave a comment (or write your own post!) telling me what your Auto-Buy Authors are. As you can see, not all of mine are crime fiction writers, so there's no need for yours to be either. If you do decide to write your own post, please please please leave me a comment letting me know so I can visit your blog and read your list!

Do we share some of the same Auto-Buy Authors? Which ones are they? Did I happen to persuade you to try any of mine? Which ones?  I know, I know-- questions, questions! I'll shut up now because I really want to know the authors' names on your lists!