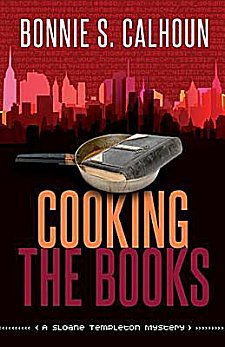 From Cyber Crimes to bookstore owner is a career move that Sloane Templeton would ever have envisioned, but that's exactly what happens to her when her mother dies of a heart attack. Besides the bookstore, the rest of her inheritance seems to consist of a cast of loosely-hinged neighborhood characters including the woman who manages the bookstore, a group of senior citizens who meet weekly for book club, and an aunt whose culinary skills are lethal.

Into this mix throw an extremely valuable book, a violent ex-boyfriend, a real estate company eager to buy the bookstore, a woman who's left her abusive husband, and a hacker leaving cyber threats on the store's computers. When things heat up, Sloane doesn't know in which direction to look first.

Cooking the Books has the occasional one-liner that's laugh-out-loud funny, but its execution is flawed. The author's word choice feels awkward at times, and sometimes phrases are just plain overused. (Characters too often "huff a puff" of air and the "Sigh." count is extremely high, for example.) There are two main plot lines in the book, one dealing with the valuable book and the other concerning the real estate company trying to buy the bookstore, but they're dealt with clumsily. One is brought to the forefront for a few chapters, then it's set aside while the other is mentioned. The story is also extremely slow to start moving. I began to think that I was reading a story about a group of colorful characters who walked in and out of a bookstore, and not reading a mystery in which crimes supposedly occurred.

Before it sounds as though I'm doing nothing but a slice-and-dice job on this book, let me say this: it shows a ton of promise. What I listed as flaws are simply bobbles in execution. What a book truly needs-- a good story idea and characters who live on the page-- are here in Cooking the Books.

The book is filled with interesting characters. In this debut, a few of them may appear to be solely comic relief, but they've been introduced to the reader and now they're available to step up to the front in future books. (And I have a feeling that's exactly what they'll be doing.) Sloane herself is a multi-faceted character capable of making me laugh, shake my head, agree with her, or itch to shake some sense into her. She's a woman with rotten taste in men, going gaga for pretty, abusive males with lots of muscles. But Sloane knows she deserves better, and she refuses to give up.

Good for you, Sloane! Your life on the page has just begun, and I hope you and your zany group of friends have many more adventures to come!
by Cathy at Thursday, April 05, 2012