A Vine in the Blood by Leighton Gage 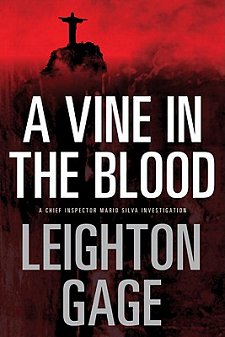 First Line: Less than an hour after Juraci Santos was unceremoniously dumped into the back seat of her kidnappers' getaway car, Luca Vaz crept through her front gate and poisoned her bougainvilleas.

The kidnapping of this woman constitutes a national emergency. You see, it's the eve of the FIFA World Cup, and Brazil is the host country. Brazil is assured of a victory due to the skill of Tico "The Artist" Santos, and since the entire country is football (soccer) mad, the level of celebration will be beyond imagining. However... Juraci Santos is The Artist's mother, and her kidnapping insures that The Artist is out of the game.

Since this is such a serious matter, Chief Inspector Mario Silva and his team are called upon to save the day (and the victory).  There is no lack of suspects, and each one must be questioned carefully, doublechecking motives, opportunity, and alibis. Are the kidnappers supporters of arch rival Argentina's team? The Artist's gold-digging girlfriend whom his mother hated? His main rival in Brazil? The man whose career Tico Santos destroyed? Or someone completely different?

I think I had a smile on my face the entire time I was reading this book. I love the camaraderie of Silva's team, how they work together and tease each other, and that was sorely missing in the last book of the series, Every Bitter Thing. (This camaraderie reminds me a bit of that enjoyed by Inspector Montalbano's team in Andrea Camilleri's excellent series.) Part and parcel of how this team works together is the skill with which Silva dangles just the right carrot in front of his burro-ish bureaucrat of a boss. The interaction of these characters is one of the things that makes this series so special.

Investigating each of the suspects turns out to be a marvelous guided tour of life in present-day Brazil, from the high to the low. It's also where Gage neatly disguises his excellent bit of misdirection. Whether I like it or not, I sometimes think I have a bit of the Eye of Sauron in me as I read crime fiction. My "eye" passes over each character until it suddenly stops, staring intently at The One Who Did It. In A Vine in the Blood, my eye was hoodwinked, and I liked that very much.

Whether it's characterization, plot or setting, A Vine in the Blood is possibly the best book in this series. If you have yet to sample it, fear not. This book stands on its own very well. My personal recommendation would be to read the entire series. Each book is a window into a fascinating country.