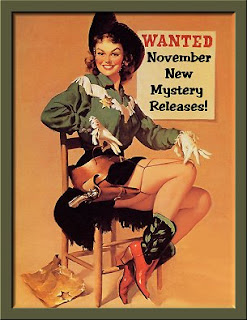 Time certainly does fly, doesn't it? I swear I just posted the new releases for October, and it's already time for November!

This latest batch of books I've rounded up is a good mix of favorite authors-- like Ann Parker, Susan Hill, Sue Grafton and Michael Connelly-- and new authors whose books I want to try. You know me-- always ready to extend my reading base!

As always, the titles are grouped by release dates, and I've included the information you'll need to find them at all your favorite book spots. Happy reading! 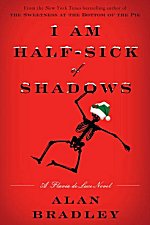 Synopsis: "It’s Christmastime, and the precocious Flavia de Luce—an eleven-year-old sleuth with a passion for chemistry and a penchant for crime-solving—is tucked away in her laboratory, whipping up a concoction to ensnare Saint Nick. But she is soon distracted when a film crew arrives at Buckshaw, the de Luces’ decaying English estate, to shoot a movie starring the famed Phyllis Wyvern. Amid a raging blizzard, the entire village of Bishop’s Lacey gathers at Buckshaw to watch Wyvern perform, yet nobody is prepared for the evening’s shocking conclusion: a body found, past midnight, strangled to death with a length of film. But who among the assembled guests would stage such a chilling scene? As the storm worsens and the list of suspects grows, Flavia must use every ounce of sly wit at her disposal to ferret out a killer hidden in plain sight." 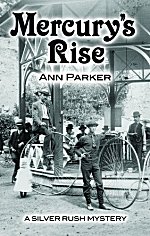 Synopsis: "In summer 1880, many come to the fast-rising health resort of Manitou, Colorado, at the foot of Pike’s Peak to “chase the cure” for tuberculosis. But Inez Stannert, part-owner of the Silver Queen Saloon in Leadville, travels for a different reason to this town renowned for its mineral springs and scenery. After a long separation, she’s reuniting with her young son, William, and her beloved sister, Harmony. However, the stagecoach journey to Manitou turns lethal when East Coast businessman Edward Pace mysteriously dies under the horrified gaze of Inez and Pace’s wife and children.


After they arrive at the posh Mountain Springs House hotel, Pace’s widow begs Inez to make inquires into her husband’s untimely death. As Inez digs deeper, she uncovers shady business dealings of those hoping to profit from the coming bonanza in medicinal waters and miracle remedies, medical practitioners who kindle false hopes in the desperate and the dying, and deception that predates the Civil War. Pace’s sudden demise is not the only event that tarnishes Inez’s hopes of a happy reunion with her son and sister. Inez’s husband, Mark Stannert, has reappeared after a year-and-a-half absence, after Inez has made other plans for her future."

Synopsis: "A top-secret drone crashes in the lawless Horn of Africa. The CIA is prepared to write off the loss until evidence surfaces that the wreckage of their prized aircraft is hidden in a hangar outside Khartoum's main airport. The hangar is owned by a shady cargo airline that flies ancient DC-3s across Africa and the Middle East. The name of the company does nothing to still concern: FBN-Fly by Night Aviation.The U.S. government must find out what is in the hangar, and when an FBN airplane crashes, the opportunity arises for the National Transportation Safety Board to send an investigator to get to the bottom of things. Jammer Davis is the NTSB's biggest headache, but also its best solo operator. He goes to Sudan in the name of solving anair crash, but with the true aim of locating the priceless remains of America's latest techno-logical marvel.As Davis enters this inhospitable world, he finds the two disparate mysteries strangely intertwined. True to his nature, Davis barges ahead. Yet everything he finds takes him in reverse." 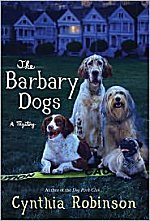 Synopsis: "Max Bravo is ready for some rest and relaxation. But when an old friend takes a leap off the Golden Gate Bridge, Max realizes that rest and relaxation simply aren't in the cards. The jumper, Frank Kelly, was a failed writer and an accomplished hothead. Max acquires Frank's journal, and is soon following the dead man through a foggy landscape of artistic manias and romantic intrigues. Along the way, he encounters a motley crew of  crackpots, bohemians, and wily ghosts that refuse to be buried in San Francisco’s Barbary Coast past. Fans of quirky, literary mysteries will love this second dose of Max Bravo and his outrageous adventures." 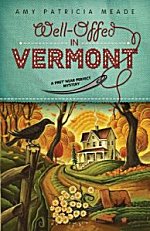 Synopsis: "In bucolic small-town Vermont, tapestries expert Stella Thornton Buckley feels out of her element—and not just because she’s fresh from Manhattan. Mere hours after moving to maple syrup country, she and her husband, Nick, find a dead man, Allen Weston, in a well on their property. The police investigation forces the couple out of their lovely vintage farmhouse and—since the motels are packed with leafpeepers—into a less than luxurious deer camp. Instead of mourning the loss of electricity and running water, Stella and Nick drive their Smart car all over the Vermont hamlet to question the quirky locals about Weston, a shrewd businessman who rubbed a lot of folks the wrong way. Stella and Nick may never shed their flatlander reputation in this close-knit community, but can they get enough information from the taciturn townspeople to help Sheriff Mills solve the murder and sew up the investigation?" 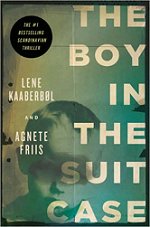 Synopsis: "Nina Borg, a Red Cross nurse, wife, and mother of two, is a compulsive do-gooder who can't say no when someone asks for help—even when she knows better. When her estranged friend Karin leaves her a key to a public locker in the Copenhagen train station, Nina gets suckered into her most dangerous project yet. Inside the locker is a suitcase, and inside the suitcase is a three-year-old boy: naked and drugged, but alive.

Is the boy a victim of child trafficking? Can he be turned over to authorities, or will they only return him to whoever sold him? When Karin is discovered brutally murdered, Nina realizes that her life and the boy's are in jeopardy, too. In an increasingly desperate trek across Denmark, Nina tries to figure out who the boy is, where he belongs, and who exactly is trying to hunt him down." 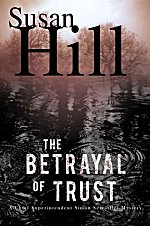 Title: The Betrayal of Trust
Author: Susan Hill
Series: #6 in the Simon Serailler series set in Lafferton, England
ISBN: 9781590202807
Publisher: Overlook Press
Hardcover, 368 pages
Synopsis: "Susan Hill's readers met the enigmatic and brooding Simon Serrailler in The Various Haunts of Men and got to know him better in the four mysteries that followed. In The Betrayal of Trust, she has written the most chilling and unputdownable book yet. Freak weather and flash floods have hit southern England. The small cathedral town of Lafferton is underwater, and a landslip on the moor has closed the roads. As the rain slowly drains away, a shallow grave--and a skeleton--are exposed; twenty years on, the remains of missing teenager Joanne Lowther have finally been uncovered. The case is reopened and Simon Serrailler is called in as Senior Investigating Officer. Joanne, an only child, had been on her way home from a friend's house that night. She was the daughter of a prominent local businessman, and her mother had killed herself two years after she disappeared, unable to cope. Cold cases are always tough, and in this latest mystery in the acclaimed series from Susan Hill, Simon Serrailler is forced to confront his most grisly, dangerous, and complex case yet." 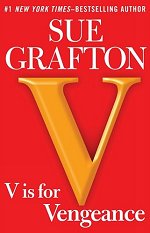 Synopsis: "A woman with a murky past who kills herself-or was it murder? A spoiled kid awash in gambling debt who thinks he can beat the system. A lovely woman whose life is about to splinter into a thousand fragments. A professional shoplifting ring working for the Mob, racking up millions from stolen goods. A wandering husband, rich and ruthless. A dirty cop so entrenched on the force he is immune to exposure. A sinister gangster, conscienceless and brutal. A lonely widower mourning the death of his lover, desperate for answers, which may be worse than the pain of his loss. A private detective, Kinsey Millhone, whose thirty-eighth-birthday gift is a punch in the face that leaves her with two black eyes and a busted nose.

And an elegant and powerful businessman whose dealings are definitely outside the law: the magus at the center of the web. 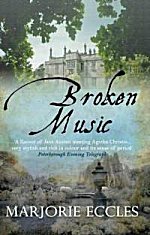 Synopsis: "The year is 1919 and the population of Great Britain is still struggling to its feet after being hit by the atrocities of the First World War. Progress is slow, even in quiet spots like the village of Broughton Underhill, on the edge of the Black Country. Gradually soldiers return, wounds begin to heal, and people try to move on with their lives. Former police sergeant Herbert Reardon has returned to the village, determined to solve an old murder--a woman was found drowned in the lake when the war was just beginning.

However, as Reardon begins to investigate, it becomes clear that secrets still abound and lips are staying sealed. When Edith Huckaby, a maid from Oaklands Park, is found murdered in exactly the same spot, Reardon is convinced that the two cases are linked. As he endeavors to discover the hidden truth, his suspects and witnesses are painstakingly trying to rebuild their lives, in a world that has been changed and scarred forever.


Broken Music is a masterful portrait of the horrors of the front line and the anxiety of the home front, as the loves and losses of wartime Britain are woven together and the truth slowly dawns on a local tragedy." 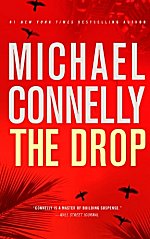 Synopsis: "Harry Bosch has been given three years before he must retire from the LAPD, and he wants cases more fiercely than ever. In one morning, he gets two.

DNA from a 1989 rape and murder matches a 29-year-old convicted rapist. Was he an eight-year-old killer or has something gone terribly wrong in the new Regional Crime Lab? The latter possibility could compromise all of the lab's DNA cases currently in court.

Then Bosch and his partner are called to a death scene fraught with internal politics. Councilman Irvin Irving's son jumped or was pushed from a window at the Chateau Marmont. Irving, Bosch's longtime nemesis, has demanded that Harry handle the investigation.

Relentlessly pursuing both cases, Bosch makes two chilling discoveries: a killer operating unknown in the city for as many as three decades, and a political conspiracy that goes back into the dark history of the police department."
Hopefully you're as eager as I am to get your hands on some of these titles. Which ones caught your eye?