Memories Are Made of This

For Halloween, I thought I would share a little story written by my mother many years ago....

When I was a small child, the Depression was still very much with us in the Moweaqua area. In fact, the Depression lasted until the World War II boom. There were two classes of people in those years: the Haves and the Have Nots. My grandparents had lost their farm, and my father couldn't find work. My parents and I lived in the front part of the house, and my grandparents lived in the back of the house. We all worked together to have the bare necessities. We put out a huge garden and canned everything we could from it for the winter months. Our meals consisted of fruits and vegetables from that garden, water gravy, and very little meat. We learned to "make do" with what we had. 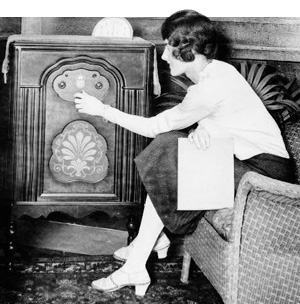 One thing we did have was a radio that my mother's father had rescued for her from a junk pile. I can remember listening to that beat-up old wreck in the evening. My mother and I would sit in the dark to listen to one of our favorite programs, "I Love a Mystery." We sat in the dark because you didn't have the lights and the radio on at the same time. That would be an extravagance when you were in the modest circumstances we were in. 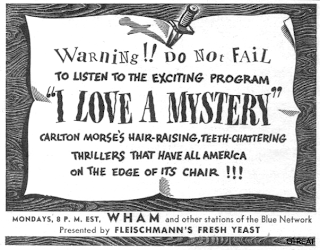 The prologue to that program is what sticks with me-- at least the pictures that the sound effects drew in my mind. There was an old wizened man cackling a maniacal laugh. His crazy laughter came from the depths of a crumbling mansion that clung to a cliff overlooking the sea. The old hulk was surrounded by dead trees, sea water sprayed the rocks below, and the undergrowth around the ruin seemed to strangle anything that showed even  the promise of beauty. Thunder and lightning lashed the old house. Shutters banged about empty, staring windows. Every once in a while a greenish light flickered and cast the shadow of a bent figure on the broken glass of a tower window. The scene was completed by the howls of a wolf... or... was it a wolf? 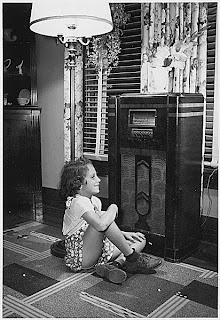 I started out sitting on the floor holding on to Mom's leg, smiling in anticipation. I ended up in Mom's lap, holding on for dear life; hair standing out on the back of my neck, broke out in gooseflesh, trying to watch in all directions at the same time to make sure that no person or no thing crept up on us.

There were many material things that we didn't have, but we learned what was necessary, and just how much we could do without and still be happy. We learned to rely on ourselves and to love one another without gifts as bribes.

Most of all I miss my mother's lap, and that warm feeling of being safe from all the monsters and things that go bump in the night.