Hell Is Empty by Craig Johnson 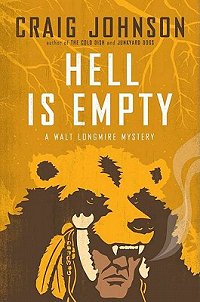 First Line: "Didn't your mother ever tell you not to talk with your mouth full?"

If the title of this book sounds familiar, it's a partial quote from Shakespeare's The Tempest: "Hell is empty And all the devils are here."  I was in complete agreement with Shakespeare when the book opens with Walt and Deputy Saizarbitoria in a restaurant making sure their prisoners eat their lunches. All three prisoners are murderers, and two of them are way off the crazy chart.

Just as my nerves calmed down due to two of Absaroka County's finest doing everything by the book (and then some), the prisoners are transferred to FBI custody and put into a van with more dangerous prisoners. Walt has to go along because they're still in his jurisdiction. Even though it's May, that means nothing in the high mountains, and there's a humdinger of a snowstorm coming. The way Walt figures it, the FBI and the prisoners will be out of his territory and he'll be back home enjoying dinner with Vic before the storm hits.

The prisoners escape with hostages and head higher into the mountains. While Walt still has a phone that works, he gives his dispatcher orders for his troups, and then he heads out to capture the bad guys. Alone. In a howling snowstorm. Why? In Walt's own words:

I applied the simple rule that allowed me to make stupid decisions in these types of situations: If I was down there, would I want someone coming after me?

When you're a hostage and scared out of your wits, the foremost thing on your mind is COME SAVE ME! See why I'd vote for Walt Longmire?

You do have to wonder if Walt's lost a few marbles, though. The weather is right from the bottom circle of Dante's Hell. He can barely see. It's more than cold enough to freeze bits of him off. The terrain is rugged and not easy to traverse on a sunny summer's day. And he keeps seeing things. If all that weren't bad enough, the craziest escapee of them all keeps playing mind games with him.

Once those prisoners escape, this book grabbed me by the throat and would not let go. Walt's trademark humor is there to help lighten what would otherwise be a very grim plot. Hell Is Empty is very much his show. Everyone else is on the sidelines, fighting the storm in an attempt to break through and help. Johnson builds so much tension that it's almost impossible to put the book down.

One man against the elements. One man to stand up against the bad guys. Walt Longmire is my sheriff of choice. I just wish he'd be able to chase the bad guys in good weather. In a field of flowers. Under sunny skies and a balmy breeze. He's no spring chicken anymore, and I want him to last through many more books to come!