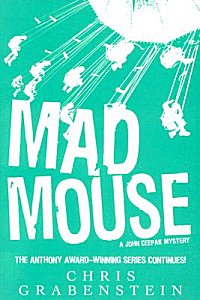 It's almost Labor Day in Sea Haven, New Jersey, and Danny Boyle is really hoping the new police chief is going to name him the new full-time officer. In the meantime, he's going to spend the evening celebrating National Toasted Marshmallow Day with his friends. Unfortunately the night is spoiled when Danny and his group are targeted by paint ball ninjas.

For a short while, everyone thinks it's "just kids" getting drunk, getting high, and blowing off steam at the end of summer. But there's another attack that includes bullets as well as paint, and one of Danny's friends is rushed to the hospital, fighting for her life. Ceepak doesn't have to convince Danny that someone is looking for revenge on him and his friends-- but Danny's got to figure out why. The big Labor Day celebration in Sea Haven is about to start. Danny and his friends won't be the only ones in the line of fire.

This book has a lot to say about being young, about being thoughtless, about how actions have consequences, about doing what's right... but a lot of that may become obscured by the relentless pace of the plot. "Mad mouse" is a term for a small roller coaster whose sharp turns make the riders feel as though they're being pitched out into space-- and to their deaths. "Mad mouse" could also be an excellent term for the plot of Grabenstein's book. Once this roller coaster has started, there's no stopping it.

it was good to see that John Ceepak is less tightly wound than in the first book in the series, and young Danny Boyle is the perfect narrator-- a rather gawky Every Guy who's smarter than he thinks and is extremely impressionable. His lucky day was when he teamed up with John Ceepak, a man with a strong moral code that he will not break ("I will not lie, cheat or steal nor tolerate those who do"). It's almost impossible not to like Danny when he notices things like this:

Her eyes tell me she's probably somebody's mom because they look tired, maybe even sad. I figure her kid is a teenager. I remember my mom's eyes when my brother and I were teenagers-- she looked like we never let her sleep. I also figure Rita is a single mom. Maybe it's the way she looks when Ceepak is polite, like maybe her first guy wasn't so nice.

If you put your mind to it, the bad guy isn't all that difficult to figure out, but I didn't care. Besides, Grabenstein throws a curve or two in with the bad guy's identity so you feel as though you're heading for another one of those mad mouse turns.

I know I mentioned reading the first book in the series, but it's not necessary to read it (Tilt-a-Whirl) before reading Mad Mouse. Just enough detail is given to keep things moving without making anyone confused.

When I finished the last page, I had that best of all reader reactions: a stunned (and whispered) WOW. And those last five sentences? They choked me up and put tears in my eyes. It's a good thing I didn't have the rest of the books in this series sitting on a shelf. I would've grabbed them all, put a DO NOT DISTURB sign on the door, and holed up until I'd read every single one.