The Samaritan by Stephen Besecker 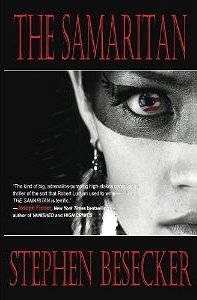 First Line: Like any experienced big-game hunter, the man shouldering the high-powered sniper's rifle ignored the elements and focused on opportunity.

Kevin "Hatch" Easter is well acquainted with the feeling of being an outsider. As a child, he grew up as a half Seneca Indian in a mostly white society. When his parents were killed, he moved to the Cattaraugus Indian Reservation to be raised by his shaman grandfather. That feeling of being an outsider disappeared when he met and married Karen, and when he found a job he could believe in-- being a tracker for the Central Intelligence Agency.

All that shatters when a mob collection goes wrong and three people are killed-- Karen Easter among them. Evidence is found, and the case is all tied up in a pretty bow. Justice has been done. Except that someone doesn't buy it. Someone thinks the guilty are still out there and is systematically stalking and killing anyone who may have had a part in the murders.

Everyone thinks Hatch has gone rogue, and CIA Deputy Director of Intelligence Jack Slattery puts top field agent Gray Taylor on the job. He has no other choice.

This book is fast-paced and well-plotted. I know thrillers are not the type of book you turn to when you tend to focus on characterization, but I do enjoy reading them from time to time, and they normally have just enough about the characters to keep me happy. However, this book had a bit of awkwardness to it, and I just couldn't fall into it completely.

Hatch is a fascinating character, and so is his brother. I wanted to know more about them, but the author was trying to keep everyone guessing as to whom the stalker was, so those two were kept back in the shadows for the most part. As far as I was concerned, the identity of the stalker was fairly cut and dried. There were a small number of characters, and the process of elimination quickly led me to the killer.

This is a book in which there is a lot to like. Besecker has hit the jackpot with his cast of characters, and I'm hoping the next book will use them to their full potential. In this book, however, he worked so hard to keep the killer's identity a mystery that I could never feel invested in the story.