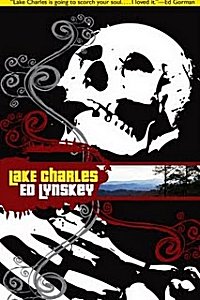 First Line: My twin sister Edna seated between Cobb Kuzawa and me snapped her gum.

1979 is not being kind to nineteen-year-old Brendan Fishback. Idly hoping that his song-writing efforts will make his name in Nashville, instead his dope-smoking partying has landed him in deep trouble. Accused of murdering the beautiful daughter of a local big shot, Brendan is out on bail, and has stopped smoking marijuana completely. Now he's headed on a fishing trip to Lake Charles, Tennessee, with his best buddy, Cobb, and his twin sister, Edna. Brendan knows he's going to have to do something to clear his name, but right now, he just wants to relax. Unfortunately, it's going to be a long time before he's allowed to do that.

Lake Charles is a dark tale of Smoky Mountain politics, corruption and drugs.  It is violent and moves as swiftly as a mountain stream. The writing is well-paced and very evocative of its rural setting. There are so many things to like about this book, but I kept finding my mind wandering as I read. I am a very character-driven reader. For me the most interesting characters in the book were Cobb and Edna, and they're dealt with very quickly. I tried to refocus on Brendan, but it just didn't work.  I was left with a book that I liked a great deal, but one that I didn't particularly enjoy.