The Trail of the Wild Rose by Anthony Eglin 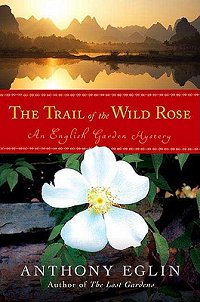 A party of plant hunters who journeyed to the remote corners of China and are now dying off one by one supply Dr. Lawrence Kingston with his fourth mystery.

A colleague at Kew Gardens enlists Kingston to go to an Oxford hospital where a member of a recent horticultural expedition to China lies very seriously injured. The patient's unconscious ramblings raise questions about what happened on that expedition, about the group's objectives, and about the man's own identity. After the patient's death, Kingston interviews other members of the party, gradually uncovering a nasty conspiracy.

I have greatly enjoyed the other books in this series, but this one had a few elements that got right up my nose. Kingston's fastidiousness and vanity were emphasized a bit more in this book, and with his penchant for haring off to interview and investigate-- with and without the prior knowledge of the police-- led me to believe that the man thought of himself as a silver-haired John Steed. He also lost several Brownie points by obsessing over whether or not to be seen with a female character because she didn't wear makeup.

Kingston's friends always want to fix him up with a female so he'll be happy. With his attitude, I hope for the females' sakes that they never succeed. Speaking of friends, several times throughout the book, Kingston went to lunch with a friend to new restaurants. The result of this made the book feel more like a gourmet's tour of southern England than a mystery.

The Trail of the Wild Rose began with such promise in a biologically diverse and remote corner of the world, but it devolved rapidly into a bumbling investigation in which a former professor told the reader much more than what was shown. I sincerely hope that in the fifth book in this series, Kingston's opinion of himself is not nearly so high.

You can read this book out of order without becoming confused; however, I would suggest that, if you've never read a book in this series before, you try one of the first three. They are very enjoyable.


Buy from Amazon.
Buy from The Book Depository.
Buy from an Indie Bookseller.
by Cathy at Tuesday, January 18, 2011