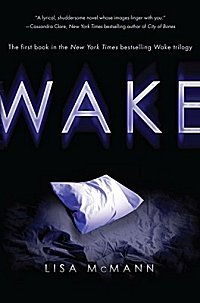 Seventeen-year-old Janie Hannagan lives on the fringe in more ways than one. Janie lives with her mom, an alcoholic, and at an early age, Janie learned that she was responsible for her own welfare. And if she's near anyone when she falls asleep, she gets sucked into their dreams. It's all to invasive-- and all too same old, same old. She's trying to save money for college and works at a nursing home. She likes working there; old people usually don't sleep soundly enough to dream.

She can't tell anyone about this ability that she can't control. They'd think she was a freak. So when she falls into a particularly gruesome nightmare in which she's a participant as well as a witness, she has no idea what she's going to do.

This book is fast-paced and almost immediately hooked me. Janie is a very sympathetic character, and it was easy to get emotionally involved as she tries so desperately to stay out of other peoples' dreams. I'm looking forward to following this series to see what happens to her next.