The Patience of the Spider by Andrea Camilleri 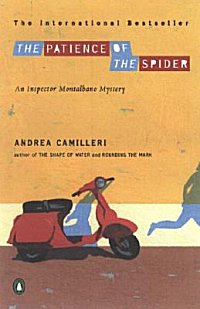 First Line: He jolted awake, sweaty and short of breath.

Still recuperating from the events which occurred in Rounding the Mark, Salvo Montalbano is called back to work when a young woman is kidnapped. The investigation has the added bonus of giving him something to think about other than his own mortality. Unable to let his colleagues handle the case themselves, Montalbano finds himself focusing on very subtle clues, such as the direction in which the kidnapped woman's motorbike is pointed, and it doesn't take him long to believe that this case has more to do with extortion than it does kidnapping.

Although I love this series and enjoyed the book, it is a weaker entry in the series. The plot machinations leading up to the identity of the kidnapper were rather transparent, and there was a bit too much of Montalbano's solo ponderings and not enough of his excellent (and hilarious) team. There was also a bit too much of Livia in this one. I don't appreciate Livia as much as others might; it seems she flies into town just to argue with Montalbano, and I've never been a fan of prima donnas and fighting.

Be that as it may, this is still one of my favorite mystery series, and I can't wait to read Montalbano's next adventure!