Holmes On the Range by Steve Hockensmith 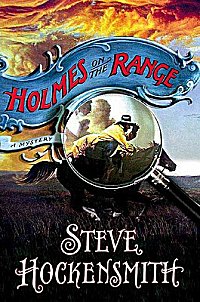 First Line: There are two things you can't escape out here in the West: dust and death.

When brothers Old Red (Gustav) and Big Red (Otto) Amlingmeyer sign on as ranch hands at a spread known for being secretive, the only things they're expecting are lots of hard work, plenty of bad pay, and a bit of free time to enjoy reading their favorite stories about Sherlock Holmes. When a couple of men turn up dead, Old Red sees it as the perfect opportunity to employ his "deductifyin'" skills, and he sets out to solve the case.  Although he doesn't like the looks of it one little bit, Big Red is along for the ride.

If you read a lot of crime fiction, you know that there are some prime directives. One of them has to do with the disposition of the corpse. This book is so good that I forgot all about that basic rule.

Author Hockensmith has come completely out of left field and scored a home run with this tale of two brothers in the Old West. Old Red was the oldest brother who worked hard to keep food on the table for his mother and younger siblings. As a younger brother, Big Red stayed home and had schooling. He knows how to read and write-- something his older brother never had the chance to learn. The stories of Sherlock Holmes fires the imagination of Old Red, and he believes that this is something he can do even if he doesn't have an education. If he can observe and deduce, he can be every bit as brilliant as the grand detective. Big Red has a rather jaundiced view of the whole thing:


Old Red didn't answer with words. He just turned and showed me that little wisp of a grin he slips under his mustache when he thinks he's being clever.


Oh? his smile said. A feller can't be both?


I thoroughly enjoyed this tale. Hockensmith has a unique voice and vision, and I can't wait to read the further deductifyin' adventures of Old Red and Big Red.