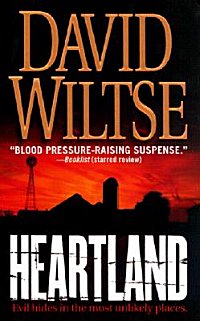 First Line: "Some people trail squalor behind them," Walter Matuzak was saying, eyeing the building with disgust.

A botched Secret Service operation has left Billy Tree severely wounded and traumatized and his partner dead. The best thing for him to do is to go back home to small town Falls City, Nebraska to stay with his sister and recuperate.

He's not back home very long before he finds out that interesting things have been happening to his family, friends and former school mates, and when a shooting at the local high school leaves people dead and plenty of unanswered questions, Billy finds himself helping out the local sheriff in an attempt to find the killer.

Unfortunately this book seems to be a good idea with mediocre execution. Billy's overwhelming self-pity wears thin quickly, and his habit of using a phony Irish brogue during times of stress just seems silly after several other characters tell him it's a stupid affectation.

The rest of the characters are straight out of central casting, and although the action sequences make excellent use of the Nebraska landscape, the pacing seems off. In many ways the best part of the book was the ending, which takes place in a grain silo. Having grown up in central Illinois, my friends and I were told many times, "Stay out of the grain silo!" We didn't-- and one time we almost came to grief ourselves.

City dwellers beware: there are lots of scary things out in the country. As Billy Tree found out in Heartland, there are more things than grain silos to make your heart beat faster.