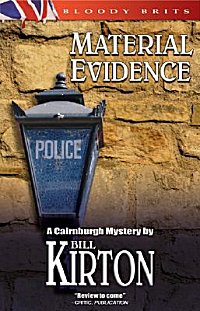 Detective Chief Inspector Jack Carston is newly arrived from England in Cairnburgh, near Aberdeen, Scotland. He relishes being able to drive down virtually empty roads that have few houses.

When he's put in charge of the brutal murder of Stephanie Burnham, Carston finds that the case is a complete puzzle. Everything points to the husband being the murderer, but somehow the pieces just don't fit together. Each person Carston interviews seems to have a radically different opinion of the victim, and he knows that he's going to have to solve the riddle of Stephanie Burnham's personality before he can find her killer.

This book was a very enjoyable read. It was refreshing to read about a policeman in a happy, stable marriage who doesn't have any psychological trauma with which he's dealing. Carston and his wife have had their share of problems, but they've actually worked them out. I also appreciate Carston's common sense and snarky sense of humor:

As he flicked through the forms and memos, he toyed, not for the first time, with the idea of having a rubber stamp made which said "Considered, Reviewed, Acknowledged, Processed" on it with each initial letter a bold capital. He knew that most of the stuff was circulated to convince certain individuals of their own worth and was a waste of time, resources and mental energy. The implementation path of most of his circulars ran straight from his in-tray to the wastepaper basket.

Add to the cast of characters a good sense of pace and an excellent plot that kept me guessing and you'll see why I liked this book. The end result? Another mystery series of which I want to keep track. Oy vey....