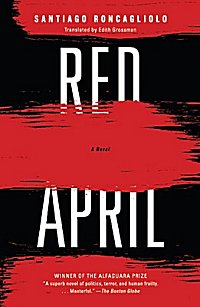 First Line: On Wednesday, the eighth day of March, 2000, as he passed through the area surrounding his domicile in the locality of Quinna, Justino Mayta Carazo (31) discovered a body.

Felix Chacaltana Saldivar is an unambitious prosecutor living in Lima, Peru. Haunted by his mother, abandoned by his wife, Felix loves literature and devotes an entire room of his house (and a good percentage of his waking thoughts) to the spirit of his dead mother. For some reason known only to the gods he has been put in charge of a strange murder investigation, which twists and turns to its surprising conclusion.

Well... I'm going to assume it's a surprising conclusion because I just could not finish this book. One part of my brain loved the look into the politics and country of Peru and didn't want to stop reading. The other part of my brain was so disappointed by the main character and the writing style that I did stop.

I'll talk about the writing style first. I should know better than to get a book which contains the following words in its description: "stunning", "self-assured", "clarity of style", "complexity", "riveting", "profound", and "deft artistry".  99% of the time when I read the book, I'm simply stunned and let it go at that. There was a sly, arch tone to the writing that I found alternately confusing and annoying.

If I wanted to be blunt, I'd say that Felix Chacaltana Saldivar was too dumb to live. Evidently he's spent way too much time in that room talking to his dead mother. The room and the talking to the dead may be a cultural tradition, but he carried it to excess.

I reached the point of no return when Felix went to a village to investigate. He had an idea going in that the area was very unstable politically. When he got there, he was told that it, indeed, was a very dangerous place to be. So what does he proceed to do? He takes the moral high ground when questioning people, and he won't stop questioning why laws are not being enforced. Yes, I do have morals, and yes, I do believe in law enforcement-- but not when you're putting people's lives in danger. Felix, having the luck of the naive and stupid, can leave that village and return home. The villagers he questions must remain there and hope they live to see the sun rise in the morning.

Enough of my complaints. I've seen by several other reviews that other people have read and enjoyed Red April. Unless you're the type of reader who is annoyed by many of the same things I outlined above, you may well be one of them. I sincerely hope that you are.