The Drop Edge of Yonder by Donis Casey 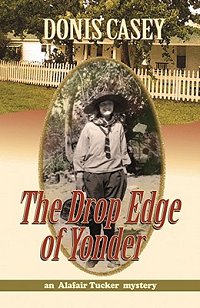 First Line: When I think about that day, Mama, here's what sticks in my mind.

One hot but pleasant evening in August 1914, a gunman ended a group's outing by killing Bill McBride, wounding Alafair Tucker's daughter, Mary, and kidnapping Bill's fiancee, Laura. Although the authorities are searching high and low for the bushwhacker, they can't seem to find him. As Mary recovers, a pall of sadness seems to hang over her, and her mother Alafair would do anything to put a smile on her daughter's face and to hear Mary's laughter.

Mary can't get rid of the idea that she has information that would help find her Uncle Bill's killer-- if only she could remember it-- but her head wound is slow to heal. She begins trying to find quiet spots away from everyone else, which drives her mother crazy. After all, the killer is still in the area.

Much of author Donis Casey's series (and her recipes) is based upon her own family history during the early days of Oklahoma. Life on a farm at the turn of the twentieth century is so wonderfully depicted that it reminds me of Sharyn McCrumb's Ballad novels set in Appalachia. The mother of twelve children, Alafair Tucker knows that the only reason why she's able to find the time to play detective is because the elder of her children are old enough to take care of their younger brothers and sisters as well as the house and the chores around the farm. Alafair is also lucky that the sheriff in Boynton has a relaxed and practical attitude towards her clue gathering:

"I don't know if it's just an accident or luck or what, but in the last couple of years, she's managed to find out things I couldn't that helped bring a couple of murderers to justice. I expect folks will tell her things they won't tell me, since she can't throw them in jail. But however she does it, I'm not too proud to stand back and see what she comes up with."

The mystery is a strong and interesting one in The Drop Edge of Yonder, especially since Alafair's daughter is in danger.  Each chapter begins with an excerpt from Mary's diary in which she writes everyday in an attempt to remember anything that may lead to the identity of her uncle's killer.

What impressed me the most in this book was the character of Alafair herself. While interacting with her daughter, Mary, and her youngest child, Grace, Alafair's behavior epitomizes the best in motherhood and can easily bring smiles or tears to a reader's face.

This series is one of my favorites, not only because of the plotting and characterization, but because the language and the setting reminds me of my own farming roots. If you're in the mood for an historical mystery series that sets you smack dab on farm wife/sleuth Alafair Tucker's porch for a chat and a glass of iced tea, look no further than Donis Casey's excellent books.