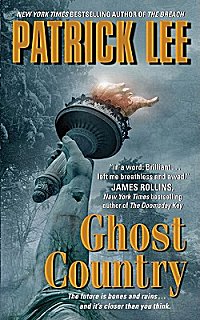 First Line: Fifty seconds before the first shots hit the motorcade, Paige Campbell was thinking about the fall of Rome.

A top secret anomaly has been passing strange and indecipherable technology to our world for decades. The latest device it's shared can let a person look into the future.

What Paige Campbell saw when she looked seventy years into the future scared the hell out of her. When she and her colleagues take their discovery to the President, they are attacked after leaving the meeting. Travis Chase must rescue Paige because Paige knows that in four short months the world will be a ghost country scattered with the bones of billions. They must do everything in their power to prevent this-- even if it means being lost on the wrong side of the future.

From the opening attack on the motorcade to the last page, Ghost Country is a fast-paced rollercoaster ride that doesn't let you go. Even though there were times that I felt out of synch with the relationship between the two main characters (not having read the first book in the series), the action more than made up for it.

I'll definitely be looking for more of Travis Chase's adventures.