Death in the Truffle Wood by Pierre Magnan 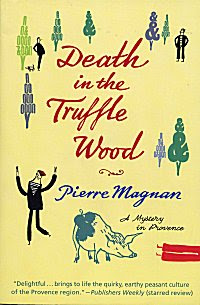 Five young people have disappeared in the vicinity of Banon in Provence. When Commissaire Laviolette comes to investigate, villager Alyre Morelon immediately demands that the police officer looks into a recent incident when someone tried to kill his Roseline, the best truffle-sniffing pig in the entire area.

Laviolette has been sent to Banon because there's nothing remarkable about his appearance and he can blend in anywhere. Well... that's what he tells people. What he's not telling anyone is that his unremarkable visage hides a very observant and intelligent man. When Laviolette obliges Morelon and looks into the incident concerning the pig, he stumbles across something that ties right into the missing persons case he is investigating.

Originally published in 1978, some of you young whippersnappers who read Death in the Truffle Wood may miss your computers and cell phones, but this old fogey found their absence refreshing. (It is nice to remember the "good old days" once in a while when detecting didn't seem to rely on gizmos.) Magnan's sense of pacing is sure, and his characterizations show flashes of brilliance. The various plot lines of injured pig, missing young people, heirs to fortunes and philandering spouses were woven together into an intriguing mystery.

As much as I enjoyed the mystery, it was Magnan's humor and his depiction of the culture of Provence and its people that really won me over. The "forensic lads from Criminal Records" who loved to race between Marseilles and Banon, the relationship between Roseline and her owner Alyre, the description of a local wedding and the behavior of the guests... these are only three instances that made me laugh and made me feel as though I was getting a feel for the real Provence.

Combine all that with a very ordinary-looking and extraordinarily observant policeman, and I find myself with a new and delightful mystery series to continue reading. C'est magnifique!