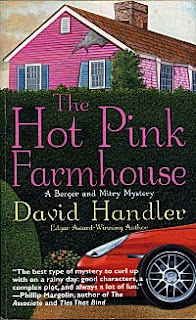 Mitch Merger is a New York film critic and author of two movie reference books. His lover, Desiree Mitry, is black, younger, very tall, and a former homicide investigator for the State Police. They both live in small town Dorset, Connecticut, where Mitch is spending his first autumn on Big Sister, a private island. "Des" has resigned from the State Police and is now a small town cop, which allows her the time she needs to take art classes.

Both of them get caught up in a dispute between pro-development locals and those residents who want Dorset to stay just the way it is. One person who's in the Leave Dorset Alone Camp is eccentric world-famous sculptor Wendell "Hangtown" Frye, and Mitch finds himself spinning in the old man's orbit.

Handler's plot of small town pleasures and developers who plot to destroy those pleasures is a very familiar one, but what saves it is the author's wonderful talent for description and characterization. Handler is one of the few authors who actually make me want to head East to live with his vivid portrayal of coastal Connecticut in autumn:

The summer people were gone now, the kids back in school. The water was bluer and colder, the sky clearer and spiced with the smell of wood smoke. Migratory barn swallows and monarch butterflies filled his trees by the thousands, pausing to feed on insects before they took off again like a cloud for the Carolinas.

Pairing amateur sleuth Berger with police officer Mitry is a good move because the investigation can be seen from both points of view. The chemistry between the two is almost perfect. There's enough spice there to satisfy most lovers of romance, but not enough to put off those readers who prefer their mysteries sans lip lock. Perhaps in the next book, Des will realize that it's a complete waste of time to try to hide their relationship in a small town.

I'm quite glad that I grabbed the first four books in this series because, so far, I'm enjoying every page.