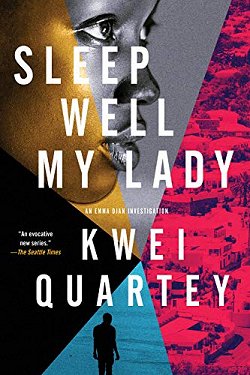 First Line: In the lavish Trosacco Valley, the Beverly Hills of Accra, no one would have anticipated a murder.
When the creator of a fashion empire is found dead in her home in an exclusive section of Accra, Ghana, there seems to be only one suspect: popular talk show host Augustus Seeza, who had a tempestuous relationship with the murdered Lady Araba. However, a quick investigation by the police leads to her chauffeur being convicted of the crime.
Dissatisfied with the outcome of the police investigation, Lady Araba's aunt, Dele, turns to the Sowah Agency where Emma Djan works as a private investigator. Emma soon finds herself working in various undercover roles, learning that there certainly is no shortage of suspects who have strong motives for wanting Lady Araba dead. Everyone at the agency is going to have to work hard to find the proof that will catch a remorseless killer.
~
The opening chapters of Sleep Well My Lady jump back and forth between various time frames so often that this caused me some minor annoyance, but once the backstory was established, I became immersed in the story-- something that is very easy for me to do each time I pick up a book written by Kwei Quartey.
The murder of Lady Araba is an intricately layered puzzle, and even though this is the second book in the Emma Djan mystery series, it takes the hard work of the entire detective agency to solve the crime. The work of a talented ensemble cast slowly peels back layer after layer of the truth. So many people have strong motives to want this talented woman dead that the reader will probably have trouble deducing which person had not only the desire but the will, to carry out the murder.
One of the things that Quartey illustrates so ably in Sleep Well My Lady is that the problems with the Ghana police force are not just limited to bribery or "looking the other way," and it's in showing readers this that he created two striking minor characters whom I hope to see in future books. One is the forthright Dr. Jauregui from Cuba, and the other is a member of the police force who is told: "...it's tough to be an island of integrity when sneaky crocodiles are all around, circling you." With the world events of the past four years, I think we all know how rare these "islands of integrity" are.
If you enjoy well-written mysteries with standout characters and a strong sense of place, you can't go wrong with anything written by Kwei Quartey. Once you've read the Emma Djan series (the first book is The Missing American), try his Darko Dawson series beginning with Wife of the Gods. You've got some excellent reading ahead of you.
Sleep Well My Lady by Kwei Quartey
eISBN: 9781641292085
Soho Press © 2021
eBook, 336 pages
Private Investigator, #2 Emma Djan mystery
Rating: A
Source: Net Galley
by Cathy at Wednesday, January 13, 2021