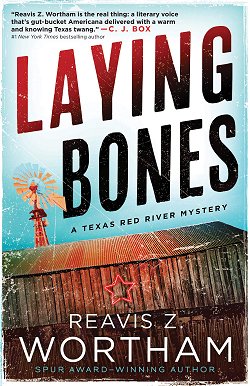 First Line: I rode against the passenger door in the front seat of my cousin's midnight blue 1964 Comet, watching the headlights cut through the cold darkness.
It's a bitterly cold January in rural Center Springs, Texas, and Constable Ned Parker doesn't believe the death of his nephew was accidental, so he methodically begins turning over every stone he can find to shine a light on the truth.
Some of the stones lead Ned right to the Starlite Club, a new honky-tonk built on no-man's land on the Texas side of the Red River. There he finds suspicious characters, drugs, and gambling, but what's worse is the string of murders that seem to be eliminating anyone who might know what really happened to Ned's nephew.
All he can do is keep digging away, relying on his fellow police officers and help from an old Texas Ranger... and his grandchildren who have a knack for being in the wrong place at the wrong time.
~
It's been a very long three years since the last Red River mystery, and I was thrilled to bits to find out that Reavis Wortham had finally written another one. Laying Bones is an excellent addition to the series, and it has a great twist at the end that I didn't see coming (but should have).
Wortham always creates a strong mystery, and finding the truth behind R.B. Parker's death is no exception. In Laying Bones, he gets extra points for fooling me, although I'm going to say that I was so wrapped up in the story that I ignored the clues he planted along the way. Besides the mystery, there are two major reasons why I enjoy this Red River series so much: the pitch-perfect sense of place and a standout cast of characters.
Wortham puts you right smack dab in the middle of rural northeast Texas in the 1960s and lets you watch as the problems of the outside world slither in. He can paint a scene that comes alive in your mind's eye, and he does it, not just by visual cues of kids going to see a John Wayne movie in a midnight blue 1964 Comet but also by language, and I think it's the language more than anything else that draws me so deeply into Wortham's stories. In the small farm village where I grew up, we didn't say "barbed wire," it was "bobwire" like it is in Wortham's fictional Center Springs-- and "You ain't just a woofin'" was a common phrase used that I haven't heard since I moved away.
The second major reason, the standout cast of characters, is probably the strongest reason of all for my love of this series. Wortham lets you see the story from more than one point of view. You get to see the world through Ned Parker's teenage grandson Top's eyes as well as those of his young cousins and friends. In Laying Bones, Top mostly feels like a fifth wheel as the others have begun pairing up. These kids are good kids, but they certainly do have a knack for being where they shouldn't be-- usually at the instigation of the free-spirited Pepper. However, if they didn't have that knack, they wouldn't be able to provide Ned and the others with valuable information from time to time.
You also get to see the story through the grownups' eyes. There's a whole passel of Parkers led by Ned. Cody, his nephew, is the police chief who's finally reached the stage of his career where he knows when to tell his uncle to calm down and stay put. But of all the grownup characters, one of my two favorites is big John Washington, the Black deputy. In his quiet way readers get to see what life was like for Blacks in 1960s Texas. When it comes right down to it, I don't know who I'd want to have at my back in a fight, John Washington or retired Texas Ranger Tom Bell. Mr. Tom might have been chasing outlaws in the 1930s, but anyone who dismisses either him or Ned Parker as just an old man does so at their own peril. Both of these men don't talk much but they have a huge presence.
From the mystery to the sense of place to the characters, these Red River mysteries are most definitely more-ish, and I hope with all my heart that it's not another three years before I see these folks again.
Laying Bones by Reavis Wortham
eISBN: 9781464214387
Poisoned Pen Press © 2021
eBook, 336 pages
Historical Mystery, #8 Red River mystery
Rating: A
Source: Net Galley
by Cathy at Thursday, January 14, 2021