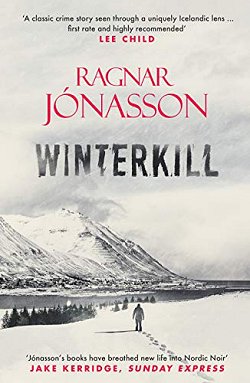 It's Easter weekend, and Police Inspector Ari Thór Arason is really looking forward to having his new constable holding down the fort at the station so he can spend as much time as possible with his girlfriend and their three-year-old son. But we all know what happens with best laid plans.

A nineteen-year-old girl falls to her death from the balcony of a house on the main street of town. Although there is not a shred of evidence that this is anything but a tragic accident or suicide, Ari Thór can't shake the feeling that it's murder. His suspicions are strengthened by an entry in the girl's diary and by the words "she was murdered" that were written over and over again on the wall of the room of an old man in a local nursing home.

Then a violent blizzard cuts off the power and access to the town, just when Ari Thór feels he's getting close to solving the crimes. Will howling wind and blinding snow keep him from his appointed task?

I am a huge fan of Ragnar Jónasson's writing, so I pre-ordered Winterkill and couldn't wait to read it. Evidently, fans of his Dark Iceland series begged the author to write one more book about Ari Thór Arason, and Jónasson obliged. While not a bad book by any stretch of the imagination, Winterkill felt flat to me, as if Jónasson's mind had already moved to greener writing pastures.

Winterkill basically rounds out the story of Arason. The series began with his moving to a small town in remote northern Iceland as a new recruit to the police department, and each successive book showed him growing in experience while his personal life didn't run nearly as smoothly. Arason is now the head of the police department in town with a new recruit of his own that he must train.

Once the dead girl's personality is fully uncovered, it's not difficult to deduce what happened, and the mystery mainly concerns itself with how Ari Thór can prove what happened and what the old man's wall scribblings are all about. When all is revealed, an occurrence at the end of the book isn't much of a surprise either. Perhaps the best thing in Winterkill is how Jónasson wraps up his main character's personal life.

For those fans who wanted all the loose ends neatly tied up, their wish came true, but don't expect this to be of the same high caliber as so many other books written by the supremely talented Jónasson.
Winterkill by Ragnar Jónasson
English translation by David Warriner.
eISBN: 9781913193454
Orenda Books © 2020
eBook, 209 pages
Police Procedural, #6 Ari Thór Arason mystery
Rating: B+
Source: Purchased from Amazon.
by Cathy at Monday, December 21, 2020