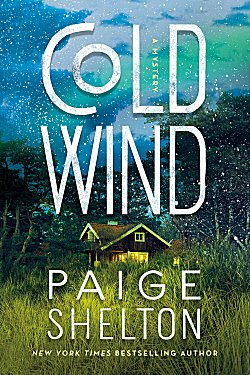 First Line: I lifted the curtain flap.
Tiny Benedict, Alaska, is feeling more and more like home to Beth Rivers. The unidentified man who abducted her in Missouri hasn't been found, so she's certainly not ready to go back there.
She's gotten back to her writing, and she's enjoying these months between summer and winter in Alaska. But when a mudslide exposes a world that has been hidden for years, two mud-covered, silent girls appear, and a strange trapper's house is found in the woods. The biggest surprise comes when a dead and frozen woman's body is discovered. No one knows who she is, but Randy, the owner of the mercantile in Benedict, seems to be right in the middle of all the mysteries.
Beth just can't fight the thriller writer in her. She's got questions, and she has the need to solve all these mysteries before winter sets in. Will she be able to?
~
As much as I enjoy the cozy mysteries author Paige Shelton has written, I prefer this new Alaska Wild series. Although these books still retain many aspects that cozy readers demand, they are edgier and have a distinctly different tone.
There are a lot of components to the mystery in Cold Wind, and I really liked how they all fit together. Readers also learn more about the man who kidnapped Beth in Missouri, and wondering where he's at and what he's up to ratchets up the suspense. Beth is a character who's easy to care about, to feel protective of. She's also got the background to be a first-rate sleuth: not only is she a bestselling thriller writer-- which means she has a tendency to see things differently than the rest of us-- she also worked for her grandfather who was the sheriff of their hometown.
Beth sometimes does risky things, and when she's getting ready to do so readers may be rolling their eyes and mentally calling her an idiot, but Shelton lets us in on the character's thought processes. Beth does assess the risks, and she does think things through before she goes ahead. It's this letting readers in on what the character is thinking that makes her such a sympathetic character-- even more so than just knowing what prompted her running away to Alaska.
Another thing to like about Shelton's Alaska Wild series is the setting itself. As Beth learns about the land and the people of Benedict, so do readers. A land that's tucked away from the rest of the world. Where cell phones don't work very well and landlines are a must (and sometimes extremely difficult to get to). Of people living off the grid and neighbors allowing them to do so without question. Of a place where people have a tendency to pick and choose the laws they obey. It's a different world up there, and Cold Wind lets readers take a good look at it as Beth becomes accustomed to her surroundings.
Yes, Paige Shelton's Alaska Wild series is what I call "more-ish"-- I want more of Alaska, I want more of the people of Benedict, and I want more of Beth Rivers. Trouble is, now I have to wait for the next book. Woe is me!
Cold Wind by Paige Shelton
eISBN: 9781250295323
Minotaur Books © 2020
eBook, 320 pages
Amateur Sleuth, #2 Alaska Wild mystery
Rating: A
Source: Net Galley
by Cathy at Monday, December 07, 2020