Tidings of Death at Honeychurch Hall by Hannah Dennison 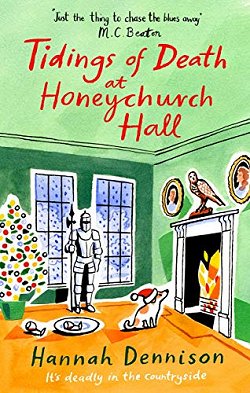 First Line: "I declare the museum open day a resounding success."
Trying to keep all the various parts of Honeychurch Hall in reasonably good condition is expensive, which is why Kat Stanford is finally able to persuade the Earl of Grenville to open the Museum Room to villagers in an effort to raise money for roof repairs. For the price of admission, visitors will be able to view an unusual display of antiques-- including the legendary Bleeding Hawk of Honeychurch Hall.
When a young couple travel two hundred miles from London to view the treasures, their appearance sets off a disastrous chain of events. The man is attacked by the estate's Jack Russell terrier. A suit of armor falls on the ancient butler. Two valuable antique pocket watches go missing as well, and when a second body is discovered near an old quarry, Kat realizes there's a cold-blooded killer on the loose who will stop at nothing to keep the past where it belongs. In the past.
~
Hannah Dennison's light touch keeps her Honeychurch Hall series fresh and entertaining. In Tidings of Death at Honeychurch Hall, the pace is almost frenetic as the cast of characters find themselves in the last ten days before Christmas.
One of the things I have always enjoyed about this series is that Dennison shows readers how tough it can be for land rich, cash poor nobility in England to keep their stately homes and estates afloat. (A case in point is Highclere Castle which featured in Downton Abbey. It was in a sad state until the television series became a hit and tourists flooded in. Only then were the owners able to finance badly needed repairs on the house.) In Dennison's series, however, the noble Grenvilles are quite the eccentric bunch. The imperious dowager countess who strikes fear in the hearts of everyone. The rather scatty countess who's easily led astray. The earl who isn't above a shady deal or two to try to accumulate some badly needed cash. The eight-year-old heir, Harry, is probably my favorite, although he does have a rather tough time of it in this book with the young guest Fleur constantly trying to lead him astray.
The stately home setting is merely the icing on the cake; it's the cast of characters who keep me coming back. It's a wide-ranging cast, too, because there's one or two that I'd like to pretend were never there, one or two who always make me laugh, and those that I truly care about-- like main character Kat Stanford. I certainly wouldn't mind checking out the antiques she sells, and I completely agree with how she handles being the center of attention of three men in this book.
The plot is a humdinger in Tidings of Death at Honeychurch Hall. The second London couple Angus and Lala show up in the museum room, readers will know they're up to no good... but just what kind of no good is much more difficult to deduce. Then there's the cutthroat business of which employee gets to live in the best cottage on the estate and the young reporter who is recording too many private conversations for comfort. And why does Lenny never seem to be where he's supposed to be? All those goings-on, that cast of characters, and the humor make this book-- and the entire series-- a winner for lovers of cozy mysteries.
If you haven't read a Honeychurch Hall mystery, you could read this sixth book and not feel lost, but why miss out on all the fun? Start with the very first one, Murder at Honeychurch Hall, and enjoy them all.
Tidings of Death at Honeychurch Hall by Hannah Dennison
eISBN: 9781472128515
Constable © 2019
eBook, 320 pages
Cozy Mystery, #6 Honeychurch Hall mystery
Rating: B+
Source: Purchased from Amazon.
by Cathy at Thursday, November 19, 2020