On Borrowed Crime by Kate Young 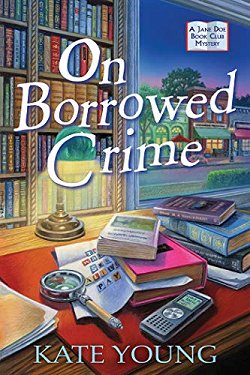 First Line: The white wrap-around dress would have me in hot water if my mother heard I'd committed the heinous crime of wearing white after Labor Day.

Sweet Mountain, Georgia, is Lyla Moody's beloved hometown where she's the receptionist for her uncle's private investigation firm. Her circle of friends are all in the true crime obsessed Jane Doe Book Club, and her parents have just celebrated their fiftieth wedding anniversary. But... her idyllic life might be coming to an end. Her best friend Melanie is on vacation. Her ex-boyfriend and horrible cousin have moved in together next door, and-- worst of all-- she's found fellow club member Carol dead and shoved into a suitcase on her doorstep.

Carol's death is ruled "undetermined," but when police discover that the suitcase in which her body was found belongs to Melanie, Lyla's best friend becomes the prime suspect. Convinced that the police are following the wrong trail, Lyla believes her job at her uncle's private investigation firm and her obsession with true crime are the perfect requirements for her to find the real killer. Of course, they just could be the exact same requirements to make her Victim #2.

When I rolled my eyes at the very first sentence of On Borrowed Crime, I should have heeded the warning and stopped right there. From a very promising premise, this first book in the Jane Doe Book Club cozy series just was not my cup of tea. From an easy-to-deduce whodunit to an awkward takeoff on Janet Evanovich's Grandma Mazur, I simply could not warm up to either the story or the characters.

Lyla loses half her wardrobe, but it's no biggie because her mother keeps her closet fully stocked at home. Lyla's car goes to the scrapyard in the sky, but-- no biggie-- she can borrow her mother's car. But if you think the thirty-one-year-old's life as the daughter of rich parents is all sunshine and roses, you obviously haven't met her mother. Apparently, Lyla's mother had some sort of tragedy in her childhood that makes her the ultimate control freak, and it's the sort of thing to fuel another book in the series, but honestly, I don't have the will or the desire to find out what happened to her. Lyla's always been obsessed with true crime, with solving cold cases, with finding justice for victims and their families, but that's not the life choice her parents want for her, so they actually put her in therapy in an attempt to snap her out of it. Marriage and babies. That's the thing. Ugh! (Hey, I can't help it if I'm pro-choice.)

However, the one thing about writing book reviews is that I'm fully aware of the fact that, while I'm describing something that drove me around the bend, at the same time I'm convincing some of you that this is exactly the book you want to read next. If you look at it this way (and I do), it's a win-win situation. The next decision is up to you.

On Borrowed Crime by Kate Young