Next to Last Stand by Craig Johnson 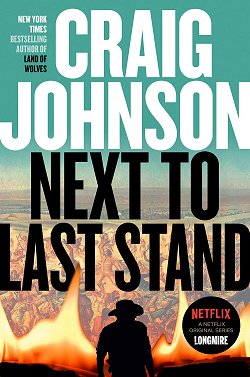 First Line: Years ago, on one particularly beautiful, high plains afternoon when I was a deputy with the Absaroka County Sheriff's Department, I propped my young daughter, Cady, on my hip and introduced her to Charley Lee Stillwater.

Sheriff Walt Longmire has had a rough time of it lately, and he's still recuperating from his experiences. Maybe that's why he finds himself visiting the Wyoming Home for Soldiers and Sailors and talking to the wheelchair posse of old veterans who sit and wave at traffic everyday. He even finds himself wondering how he'd decorate his own wheelchair when the time comes.

Charley Lee Stillwater was a resident of the home and a character that Walt made sure to introduce Cady to when his daughter was small enough to carry around on his hip. When Charley dies of an apparent heart attack, the Absaroka County sheriff is called in to try to make sense of items found in the old man's room: a piece of a painting and a shoebox containing a million dollars. Will a good old-fashioned art heist be what Longmire needs to perk up and get back to normal?

This particular review is written by someone who's been a card-carrying Walt Longmire/Craig Johnson fan since the very first book, The Cold Dish. As crazy as I am about this series, even I will admit that, while they're all good, some books are stronger than others. When I began reading Next to Last Stand, I grew a little impatient, even a little worried. Vic spent most of her time whining about being bored and being a pain in the rear end. On the other hand, Walt kept having episodes where his mind would wander off to parts unknown and he'd stare off into space for long periods. Granted, my reaction to Vic comes from personal experience. I remember being bored only once in my life, and I tend to roll my eyes when anyone says that they are. Walt is another story. I'll let Vic ride shotgun with me any day, but I love Walt. I want him to be recovered from his experiences in the last two books. I want my Walt back! (Now look who's whining...)

The good news is that, once this investigation picks up speed, Vic and Walt are both back to the normal that all fans know and love. Yippee!

I happen to enjoy a good art heist, and that's what readers will find in Next to Last Stand. The even better news is that there's more to love in the book than finding a stolen painting and the identity of the thieves. There's the look into the cutthroat art world. There are the Wavers at the Wyoming Home for Soldiers and Sailors, characters all. There's the African proverb which states "When an old man dies, a library burns to the ground." (Could we change "man" to "person," please?) There's a topnotch chase scene. There's the only chicken coop on the National Register of Historic Places. And best of all-- whether showing us how to persuade a nude prisoner to don his clothes or helping a new employee learn the ropes, there's humor, there's intelligence, there's Walt. He's my kind of guy. It's good to have him back.

Next to Last Stand by Craig Johnson

Source: Purchased from The Poisoned Pen.