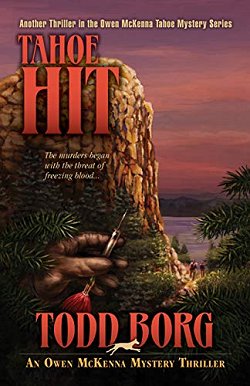 First Line: It was an ideal gathering for murder.
Private investigator Owen McKenna is hired by millionaire hedge fund specialist Carston Kraytower to investigate the deaths of two of his colleagues who have died under inexplicable circumstances in the Lake Tahoe area. As McKenna begins to unravel the secrets Kraytower has worked so hard to hide, Kraytower's son is kidnapped. Now it's a race against time to save the teenager.
August just isn't August without a new Owen McKenna thriller, and Tahoe Hit, the eighteenth addition to this marvelous series, was just what I needed. I'm addicted to Todd Borg's intricate, fast-paced mysteries every bit as much as I'm addicted to the beautiful setting of Lake Tahoe and to his marvelous characters.
In Tahoe Hit, millionaire Carston Kraytower really kept me off-balance; I never knew which way that man was going to jump. When you've got a character like that, solving the mystery gives your little grey cells a workout. Even when McKenna starts uncovering secret after secret, it still took me some time to figure everything out-- and I still missed some of the twists. I like that.
But this book (and this series) isn't just about the mystery. It has one of my all-time favorite casts of characters in crime fiction. Being an ex-cop, Owen McKenna has gone out of his way to forge good relationships with police officers in the Lake Tahoe area, and those relationships lead to much of the humor in the books. McKenna is also very observant whether it be man or beast that is the focus of his attention. He takes the time to discover how gifted young Joshua Kraytower is, and he's willing to do something about it. He also is highly observant when it comes to his sidekick, his harlequin Great Dane, Spot. McKenna knows his dog, what his dog's reactions will be, what his dog's capabilities are. When Spot can help him with an investigation, he does. But if there's a strong possibility that Spot will be in danger, you can take it to the bank that he won't be tagging along. Another plus in McKenna's favor? His relationship with entomologist Street Casey. She's brilliant, she's unconventional, and she's still dealing with trauma from her past. Many other men wouldn't, but Owen accepts their relationship on her terms. Owen, Spot, Street, and the rest of the regular cast make this series something very special.
But wait-- there's more! A fantastic Lake Tahoe setting? Check. A mystery that keeps you guessing? Check. A multi-faceted cast of characters that becomes just like family? Check. What else is there? It's the added extras that Todd Borg weaves into his narrative. Learning about a small town settled by Chinese immigrants who were brought over to build the railroad. Indian residential schools. The naturalist Aldo Leopold who believed we should leave blank spots on the map. Even a little philosophy that leads to the question "Is the life of a really bad man automatically more important than the life of a really good dog?"
Tahoe Hit-- and this entire series-- is the perfect blend of mystery, action, setting, and characterization. Tahoe Hit stands alone well, if you're worried about taking on a series with eighteen books, and I urge all of you to give it a try. Just don't be surprised if you find yourself looking for more. Owen and Spot are impossible to resist!
Tahoe Hit by Todd Borg
ISBN: 9781931296281
Thriller Press © 2020
Paperback, 352 pages
Private Investigator, #18 Owen McKenna mystery
Rating: A
Source: the author
by Cathy at Monday, August 10, 2020