Shadows of the Dead by Spencer Kope 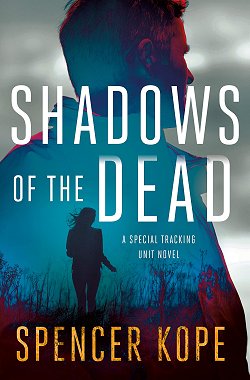 When an abducted woman is pulled from the trunk of a car after a high-speed chase, she's rushed to the hospital. When she regains consciousness in the ICU, she gives the FBI's Special Tracking Unit two vital clues: the man who kidnapped her isn't the same man who left her in the woods, and she's not the first victim.

When the kidnapper is caught after being tracked through a dense forest, he laughs maniacally and babbles about souls and someone who's going to be mad at him. Magnus "Steps" Craig and his partner Jimmy aren't after one bad guy, they're after two, and it's going to take everything they've got to catch the mastermind behind seven women's deaths.

Spencer Kope's Special Tracking Unit series has become a favorite of mine. I enjoy young Steps Craig's world-weary voice and (sometimes unintentional) humor. He's been "blessed" by a sort of synesthesia after a childhood trauma; he can see a person's "essence" on everything they've touched. This is what makes him an exceptional tracker, but it's made this young man old before his time. His blessing is also one that must be hidden at all cost.

Shadows of the Dead isn't the strongest book in this series, but it's still good. Cliffhanger haters, beware: this book ends on a doozy, so gird your loins. As much as I did enjoy this book, I have to admit that I was irked a few times. Have you ever found yourself reading a book that, when an important clue was slipped into the story, it seemed to be announced with a blazing neon sign? Well, that happened a few times in this book, and-- of course-- the experts were too dumb to pick up on them. Perhaps writers purposely do this from time to time to make readers feel like Sherlock Holmes. I don't know. I do know that it irritates me. But I digress.

Shadows of the Dead is a solid entry in Spencer Kope's Special Tracking Unit series, and after reading that cliffhanger, I'm certainly looking forward to the next book!