Knit of the Living Dead by Peggy Ehrhart 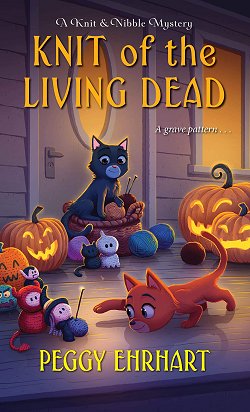 During Arborville's Halloween celebration, Pamela Paterson discovers the body of a woman dressed as Little Bo Peep, strands of yarn wrapped around her neck. It's no time at all before she and her best friend, Bettina, are hot on the trail of the killer.

Knit of the Living Dead, the solid sixth entry in Peggy Ehrhart's Knit & Nibble cozy series, provides some Halloween murder and mayhem for the residents of Arborville, New Jersey. As much as I like this series, it's one that I shouldn't read more than once per year because of the author's repetitive use of vivid colors and the daily rituals her characters share. How repetitive? I know the color of Bettina's dishes faster than I can name my own, and I could take charge in Pamela's kitchen whenever Bettina comes over in the morning for coffee.

This is definitely a series which shows the power of friendship and of what can be accomplished when good people join forces. This latest book, however, isn't the strongest in the series. I knew the identity of the killer the first time the person was described, and the will-she or won't-she of Pamela's possible relationship with next-door neighbor Richard is getting tired. Even the knitting sessions that I so look forward to seemed a bit lackluster.

But every book in a series can't be a blockbuster, no matter how talented the writer. Ehrhart's Knit & Nibble series is one that I turn to whenever I need to spend some light-hearted sleuthing with good-hearted people, and Knit of the Living Dead certainly hasn't changed that.