When I was twenty-one months old, my grandmother and my mother loaded up the Chevy and drove us from central Illinois to Phoenix, Arizona (most of the trip on Route 66) to visit my great-grandmother.
My great-grandparents divorced once their children had all flown the nest, and my great-grandmother, whom I shall call Mom Brown from now on, sought out warmer climes. Her roundabout trip to her promised land is what makes me call her Goldilocks.
When Mom Brown first moved to Arizona, she settled down in the mountains of Flagstaff in the northern part of the state. Flagstaff was way too cold, so she moved to Douglas, which is right on the border with Mexico. Douglas was way too hot, so she moved to Phoenix, and Phoenix was just right.
See why I call her Goldilocks?
She lived in a trailer park on Van Buren Street, which at that time, was not only a "main drag" but a very nice street. This trailer park in Phoenix was our destination, but we did do some sightseeing along the way.
Mom Brown's trailer was small, but it had a nice shady patio. While we were there, it rained, and the trailer roof leaked like the proverbial sieve. My grandmother had a fit and wanted to know how on earth her mother could live in such an awful place. Mom Brown looked at her and said, "Irene, it hasn't rained in two years. I didn't know the roof leaked!"
While we were there, Mom Brown decided that she wanted to take us to Catalina Island off the southern California coast. She knew the best way to get there. Unfortunately, her sense of direction was just as good as her ex-husband's (read terrible), and we never made it. I did get to wet my feet in the Pacific and build a sandcastle, though. 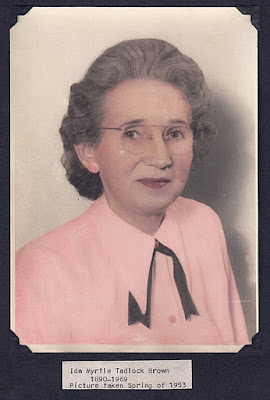 Naturally, I don't remember that first trip to Phoenix. When I think of my great-grandmother, I think of her as slightly older than she looks in this last photo.
Her arthritis crippled her hands and other parts of her body so badly that she had to leave Phoenix to come to live with my grandparents. Mom Brown could be a very difficult woman, and as her health worsened, she finally had to move to a nursing home. This was a good thing for my grandmother. I remember how exhausted and depressed she was while Mom Brown lived with them.
A lot of my memories of her involve sitting on my grandparents' front porch with Mom Brown. We would pass an hour or two on hot, lazy summer afternoons embroidering. She loved to embroider and taught me a lot about the craft although I never became as skilled as she and my mother were. I'd rather be out in the country on my bicycle or up in a tree with a book.
I also remember the day when I was dead-heading flowers under a window and overheard Mom Brown telling my mother to stop feeding me.  "Why on earth should I stop feeding Cathy?" Mom asked her. "Because she's fat!" Mom Brown replied. (I was far from being overweight.) After talking with her for another minute or two, Mom found out that Mom Brown really meant that I was too tall. She was a tall woman for her day at five feet six inches, and I was already looking her in the eye at the age of nine. She didn't think I should get any taller. Mom laughed and said, "Good luck with that!" (I still had four inches of growing to do.)
Mom Brown was a complicated woman and yet another person that makes my family history so interesting. I wonder what she'd think of my calling her Goldilocks?
by Cathy at Wednesday, July 22, 2020