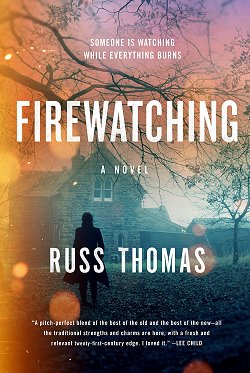 First Line: It starts with the striking of a match: the thin, dry snap of red powder scratched on white.
There are three main reasons why the good old boys of the Sheffield police department don't like their new cold case handler, Detective Sergeant Adam Tyler. One, he's gay. Two, he's good at his job. Very good. Three, he shows up their mistakes and doesn't give a tinker's about doing it. Fortunately, a case comes along that Tyler can sink his teeth into.
Six years ago, financier Gerald Cartwright disappeared. Everyone thought he was running away from his creditors, but when a skeleton is found in a bricked-off section of cellar in Cartwright's burned-out mansion, it becomes obvious that the man never left home at all.
Since he doesn't play well with others, Adam has been shunted into South Yorkshire's Cold Case Review Unit. He's the only person in the unit, and he instinctively knows that this case is his chance to get his career back on track. Luckily, he already has a suspect. Unluckily, that suspect is Cartwright's son, the man Tyler slept with the night before. The investigation will come up against close-lipped townsfolk, an elderly woman with dementia, and an escalating series of arson fires. It's a good thing he's given some help-- fellow outsider Amina Rabbani, an ambitious young Muslim constable who wants to prove herself on the force.
Firewatching is a gold mine for character-driven readers. So much of this investigation revolves around the relationships between the characters both past and present. It was a bit difficult warming up to Adam Tyler because he works so hard to keep everyone at arm's length, but I finally did, and it had everything to do with those relationships I mentioned. Constable Amina Rabbani shows a lot of promise as a detective if a bit too much zeal, but she's been working hard to prove herself-- not only to her fellow police officers, but to her family who wants her to remain immersed in their strict Muslim culture.
Occasional chapters, or blog posts, from the killer/arsonist have more to do with the story than merely deducing whodunit. I found the mounting numbers of page views, followers, and comments on these posts disturbing. This is a book that has a lot going on, and all the elements blend together nicely. I should have figured out the identity of the killer, but I was trying too hard to find out what made Tyler tick.
Russ Thomas is a strong new voice in crime fiction, and I am definitely looking forward to more investigations with Adam Tyler.
Firewatching by Russ Thomas
ISBN: 9780525542025
G.P. Putnam's Sons © 2020
Hardcover, 368 pages
Police Procedural, #1 DS Adam Tyler mystery
Rating: A
Source: Purchased from The Poisoned Pen.
by Cathy at Thursday, July 23, 2020