The Figure in the Photograph by Kevin Sullivan 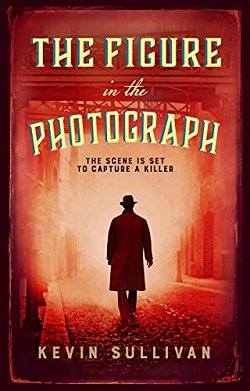 First Line: One week before Christmas in 1897, we entered a hamlet on the way to Cárdenas.
Juan Camarón and his father are only a few steps ahead of battling armies as they travel across Cuba in the summer of 1898. They've been paid to photograph the island's architecture before it is lost. Tragedy strikes when Juan's father is killed and his last photo provides proof that he was not a random victim of war-- he was murdered.
Learning he has inherited property in Scotland, Juan travels to Glasgow where he focuses on his study of photography. His invention of a new device that inadvertently solves a crime brings him to the attention of the local police, and he is asked to help them hunt down a brutal serial killer plaguing the city streets.
The Figure in the Photograph is a book that I wanted to like a lot more than I did. As it is, the only thing I did enjoy was the element of early photography.
There's an abrupt location change from Cuba to Scotland, and I was left wondering if the entire opening in Cuba was really necessary. The story is long and slow and-- except for the photography-- almost completely uninteresting. Even though the book is set in Glasgow and not London, you'd think there would be at least one comparison of the killer to Jack the Ripper, but there's not. Oversight or intentional? I'll never know, but it might have perked me up.
None of the characters, with the exception of a homeless boy Juan befriends, engaged my interest, and even that young boy was underutilized. With so little that captured my attention, why did I keep reading The Figure in the Photograph? I honestly don't know. If you decide to give this book a try, I really hope your mileage varies.
The Figure in the Photograph by Kevin Sullivan
ASIN: B081S3BLDD
Allison & Busby © 2020
eBook, 352 pages
Historical Mystery
Rating: D
Source: Net Galley
by Cathy at Wednesday, July 08, 2020