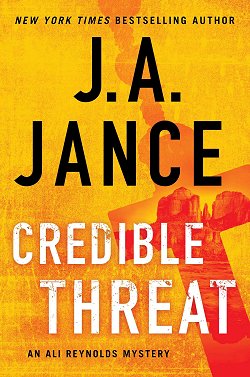 First Line: On a mid-March afternoon as the sun drifted down over Piestewa Peak, seventy-year-old Rachel Higgins wrapped her sweater more tightly around her body and took another sip of her vodka tonic.
Rachel Higgins' life has been limping along for years, but the bottom drops out of her world when she learns that her beloved son's addiction and fatal overdose may have been caused by the damage he suffered at the hands of a pedophile priest when he was in high school. Now Rachel is completely focused on vengeance, and she chooses the Catholic Church's most visible local figure, Archbishop Francis Gillespie, as her target. When Gillespie begins receiving death threats, the police dismiss them, saying they're not credible. When the threats don't stop, he turns to his friends, Ali Reynolds and her husband, B. Simpson.
B. is out of the country on a cybersecurity emergency, so it's up to Ali to track down the source of the threats. When the archbishop's driver is assassinated and the archbishop himself severely injured, Ali forms an uneasy alliance with a Phoenix homicide cop in hopes of preventing another attack. It's going to take all their expertise and a large helping of luck for them to succeed because, having missed her target once, the killer has become more unhinged and even more determined to succeed.
Although the synopsis of Credible Threat tries to cloak the identity of the person out to kill Archbishop Gillespie, it's clear from the beginning who's behind the threats and attempts on his life. This is another solid outing for J.A. Jance, who knows how to craft a fast-paced, ironclad mystery.
As good as she is with pacing and plotting; however, Jance's true (and marvelous) strength lies in the creation of her characters. Even characters who don't have that much time in the spotlight come to life under her pen. In many ways, my favorite was Sister Anselm, who has a Taser and isn't afraid to use it, but no one who reads Credible Threat can't help but be touched by the damaged Rachel Higgins. It's not easy to create a sympathetic assassin, but Jance has. It's not always easy to create a sympathetic priest in an organization seemingly riddled with pedophiles, but Jance has. As I've already said, the strength of Jance is in her characters.
I haven't been a faithful follower of the author's Ali Reynolds series. I dip my toe in from time to time just to see what Ali is up to. Even though Ali crashed and burned in her original occupation, I've had the tendency to regard this series featuring her as a sort of fairy tale. Yes, Ali crashes and burns, but she bounces back stronger than ever. She's smart. She's strong. She's pretty. She's rich. She's married to a man who has all the high tech gadgets you could ever dream of. She has all the right clothes and all the right transportation... she even gets notified of traffic jams ahead of time so she can avoid them. I imagine that there's more than one reader who envies Ali Reynolds just a tiny bit.
But-- guided by someone as talented as J.A. Jance-- the Ali Reynolds series is fun, and that can count for a lot right now.
Credible Threat by J.A. Jance
ISBN: 9781982131074
Gallery Books © 2020
Hardcover, 336 pages
Private Investigator, #15 Ali Reynolds mystery
Rating: B+
Source: Purchased from The Poisoned Pen.
by Cathy at Thursday, July 09, 2020