Murder at the Falls by Arlene Kay 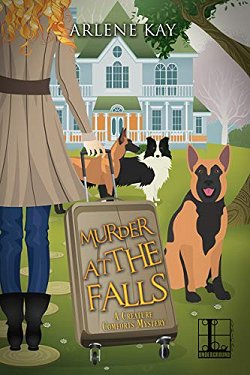 First Lines: Call me grateful. Not a do-gooder and certainly no philanthropist, but someone who firmly believes in giving back and doing my part.

Keats and Poe, the two Malinois war dogs belonging to army veteran Persephone "Perri" Morgan, have earned their therapy dog certification, so Perri and her best friend Babette Croy take their dogs to an upscale senior living facility to spend time with the residents. The Falls may have all the comforts (and then some) of home, but secrets fester behind its walls: missing valuables, feuds, and one resident even fears for her life. Magdalen Melmoth swears she's being targeted because she's the granddaughter of Oscar Wilde-- and her legacy includes an unpublished Wilde novel which could be worth millions if authenticated.

With the help of her boyfriend, investigative journalist Wing Pruett, Perri wants to outsmart a very determined killer before anyone else dies.

I really, really wanted to like Murder at the Falls, especially as I learned more about Persephone "Perri" Morgan. An orphan, foster child, and army veteran, her voice drew me right into the story. I also liked the working dog aspect and how Keats and Poe (both war heroes with the medals to prove it) could be retrained as therapy dogs to work with seniors and in such programs as Children Reading to Dogs. But... there were problems.

One resident at The Falls, the upscale senior living facility, described what Perri and her friends were doing as "Murder, She Wrote with dogs." That's a superficial fit all right, but Jessica Fletcher wouldn't write such a disjointed story. Too many aspects were trotted out and then disappeared for many chapters. Magdalen Melmoth? Here for a few chapters and then gone. The hunt for the Oscar Wilde manuscript? A hot topic, and then it, too, disappears. The whodunit wasn't particularly difficult either once I began tallying up which characters vanished for a while and which ones didn't.

However, when all is said and done, there are two things that got right up my nose more than the disjointed plot: the characters of Wing Pruett and Babette Croy. Wing Pruett did help out from time to time, but his main function seemed to be window dressing-- as if Perri was supposed to have a handsome boyfriend so-- ta dah!-- here he is. As for Babette Croy... I'm afraid that, once I get started on her, I won't know when to stop. Suffice it to say that she's a "diva-Zilla," the one type of character guaranteed to make me want to throw a book against the wall. Southern-deep-fried, beauty pageant winner, Miss Congeniality winner, she calls in airstrikes on any gray hair or wrinkle that comes within ten miles. Naturally, her clothes and makeup must always be perfect. It goes without saying that she must also be the center of attention at all times, and... gack! Consider that subject closed, y'all!

This is the first Creature Comforts mystery that I've read, and although there are things about Murder at the Falls that I liked, I won't be returning. I'm afraid of what I would do to Babette.