The Delightful Life of a Suicide Pilot by Colin Cotterill 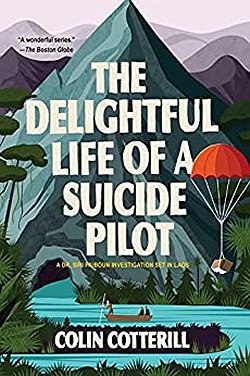 First Line: There was a myth.
A corpse's still lushly growing nose hair and Dr. Siri Paiboun's lack of reading material lead the elderly doctor and his formidable wife into their last mystery, a mystery that will solve an unknown chapter of World War II history in Laos.
An unofficial mailman delivers a bilingual diary to Dr. Siri Paiboun, and to the dismay of his wife and friends, he insists on reading it aloud, chapter by chapter-- probably because the note attached to the diary says that someone needs his help. It's the surprisingly dull diary of a Japanese kamikaze pilot stationed in Laos, but Dr. Siri can't stop obsessing over it. His wife, Madame Daeng, knows the only solution is for them to go to the place where the pilot was stationed to solve the mystery. Little do the couple know that they will be uncovering some of the darkest secrets of World War II.
I was dismayed when I learned that The Delightful Life of a Suicide Pilot is the last Dr. Siri Paiboun mystery. I love these books, not just for their mysteries, but for the characters, the knowledge I've gained, and their irreverent sense of humor. I do have to be realistic, however. Dr. Siri is in his eighties-- how much longer could we expect him to investigate mysteries?
In this last installment, Inspector Phosy has his own mystery to solve, while their daughter Malee seems to have tied down his wife, Dtui. Another favorite, Mr. Geung, makes an appearance that spotlights one of my favorite things about this series: its respect for all human beings. Geung: "I have ... Down syndrome." Siri: "So? That doesn't make you an idiot." And as all fans of this series know, Geung is not an idiot. Madame Daeng also has time to solve a mystery while Siri works with that diary.
As I followed along with Siri and Daeng, trying my best to figure out what was going on before they did, I enjoyed so many things. The way these two, who have no money, can still afford to travel. The way Cotterill brings 1981 Laos to life for me. (11,000  out of 14,000 motor vehicles in the country had no access to gasoline for instance.) And last but not least, Cotterill's fantastic sense of humor, which can be seen in phrases and sentences like "I hear she has the temper of a rabid Chihuahua" or "...the food was spicy enough to strip the paint off a tank" or even Siri refusing to cooperate with the bad guys by telling them he's suffering from "terminal horripilation".
The Delightful Life of a Suicide Pilot is a fitting end to this series, but oh, am I going to miss these characters! However, as long as Cotterill keeps on writing, all is not lost.
The Delightful Life of a Suicide Pilot by Colin Cotterill
eISBN: 9781641291781
Soho Press © 2020
eBook, 288 pages
Historical/Humorous Mystery, #15 Dr. Siri Paiboun mystery
Rating: A
Source: Net Galley
by Cathy at Monday, June 01, 2020