The Rat Began to Gnaw the Rope by C.W. Grafton 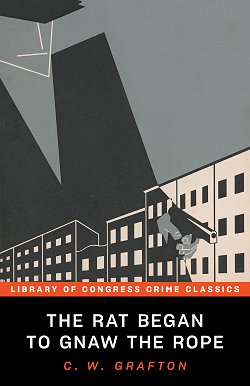 First Line: My secretary said that there was a Miss Ruth McClure to see me and I said that she could come on in.
Gil Henry may be short, chubby, and live at the YMCA. He may also be the youngest partner in a small law firm, but when a pretty young thing named Ruth McClure walks into his office and asks him to investigate the value of the stock she inherited from her father, he can't say no. Even when someone makes an attempt on his life, he continues his investigation because Gil smells something rotten and he's determined to get to the bottom of it.
Gil is beaten, shot, and stabbed. He's up to his neck in scandal, murder, and secrecy. He can't even look to his colleagues for help, so he teams up with Ruth and her secretive brother to find answers to the questions someone most definitely does not want him to answer.
I picked up this book on the recommendation of a trusted source and also because C.W. Grafton is the father of Sue Grafton. It is an honest portrayal of America on the eve of its entry into World War II and therefore may offend some readers occasionally. I choose not to become offended, instead deciding to be happy that we've moved away from that way of thought and behavior. (But honestly, there are not many such instances.)
What I found was a well-written, fast-paced mystery that kept me guessing. Wonder of wonders-- I enjoyed it. Any hardboiled or noir mysteries of this period usually bore me to tears. I find them pretentious and formulaic, but one of the main reasons why I didn't find The Rat Began to Gnaw the Rope to be that way was due to Grafton's light touch and marvelous sense of humor.
This Library of Congress Crime Classic is packed with extras: a foreword, introduction, footnotes, something about the war, a reading group guide, a section on further reading, and a few pages about the author. I have to be honest and say that I didn't read all of them, but what I did read was informative, and I found the footnotes quite useful when I didn't quite understand certain terminology.
Yes, I did enjoy C.W. Grafton's first mystery. Am I going to start reading more hardboiled mysteries? I don't think so. They're not quite my cup of tea, although if I did find more written like this one, I just might change my mind.