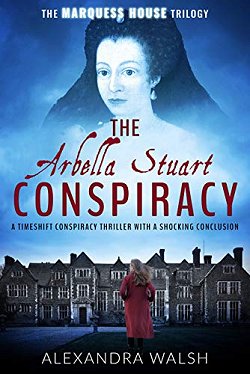 First Line: "What have you done to her?"
1603. Queen Elizabeth I is dead. As the men in power decide to pass the throne to James VI of Scotland, one woman debates changing the course of history. The identities of two Tudor heirs have been covered up for decades, and with a foreign king about to take over, this may well be the time to let the truth out. But there are reasons why the Tudor children were put into hiding and exposing them would not only put their lives in danger, but the lives of many others as well.
2019. Dr. Perdita Rivers and her twin sister Piper are back in their ancestral home of Marquess House in Wales. The walls of their home contain many riddles that they need to solve. They've already uncovered earth-shattering secrets, but they are still missing one piece of the puzzle. And just when it seems they're ready to expose the centuries-old conspiracy, old enemies resurface to put their very lives at risk.
This is a trilogy that, although it has some minor flaws, I recommend to any reader who's ever had a fascination with Tudor and Stuart history. I know I have, and I've lost count of the books, both fiction and non-fiction, that I've read about this period. It seemed as though any man with any sort of high status was out to grab all the wealth and power that he could-- and he didn't care who he had to knock down to get it. There is a sort of glamor to this period, and it's also an extremely brutal era. This period was also graced with some formidable women, Elizabeth I and Bess of Hardwick, to name just two. How women of their power and intelligence had the fortitude to deal with the men of the day escapes me. I think I'd lose all patience and keep the royal executioners busy.
The Marquess House trilogy is just the sort of dual timeline story that I love. In this third book, Arbella Stuart takes the spotlight as she tries to outlast all those who are after her-- which includes her cousin James who makes his leisurely way down to London to be crowned King James I of England. Alexandra Walsh has shown a brilliant capability for finding little-known trails in history that lead to locked doors. Nothing is known about what happened behind those doors, so she weaves a story to fill in the blanks. Most of her work at her fictional loom has made me smile, but in this third book, the fate of one of the male characters was a bit of a stretch that my imagination really didn't want to make.
For large periods of time, nothing is mentioned about the groups of people who are out to get Perdita and Piper in the modern timeline. We're just told how superior the security is at Marquess House. It's almost as if Walsh were having so much fun with her histories that she forgot all about the modern-day bad guys. When she did remember them, the only thing she could do was to create some incredibly bone-headed lapses in that superior security. Ah well. A minor quibble.
One of the most powerful themes throughout this trilogy has always been women fighting for the right to their own voice, to their own power, and the author had me mentally cheering in solidarity more than once. If you think you may want to read Walsh's work, please read The Catherine Howard Conspiracy and The Elizabeth Tudor Conspiracy first or you may become confused. This trilogy is fun, and it's so good to see an author with a good knowledge of history go to work on it with her imagination to create something that might just have happened.
The Arbella Stuart Conspiracy by Alexandra Walsh
eISBN: 9781913335847
Sapere Books © 2020
eBook, 398 pages
Thriller, #3 Marquess House Trilogy
Rating: B
Source: Net Galley
by Cathy at Thursday, June 04, 2020