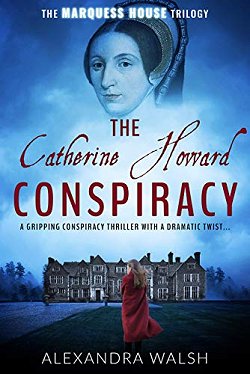 First Line: "Is there news?" asked the man as the shadowy figure of the Abbess appeared in the doorway.

Sometimes I like to sit back and wonder "What if?" I was just in the mood to do that, and Alexandra Walsh's The Catherine Howard Conspiracy was just the book to satisfy my craving.

The tale is told in two timelines. One in 2018 in the fabulous Marquess House in Pembrokeshire, Wales; the second beginning in 1539 when Catherine Howard arrives at Henry VIII's court to be maid of honor in the household of his new bride, Anne of Cleves.

For the first half of the book, the Catherine Howard timeline was much the better. I have read quite a bit of Tudor history, and at first my reaction to Walsh's portrayal of Howard was, "Wait a second... I've been told that she was a flibbertigibbet whose only interests were flirting, gossiping, dancing, and the latest fashions?" Then I remembered two things. The history of that period was written by men-- mostly in the employ of the king-- so who knows what Catherine was really like? And... this is fiction. Let's see where the story goes.

I loved where the story went. Total willing suspension of disbelief here. The portrayal of Henry VIII fit my personal opinion of the man, the political machinations were pitch perfect, and Walsh had me living with these characters in the 1540s.

Not so much in 2018 with Dr. Perdita Rivers. Since childhood, she's been estranged from her Tudor historian grandmother, Mary Fitzroy, and when Fitzroy dies and leaves her (and her twin sister Piper) her entire estate, Perdita spends way too much time moaning about poor little me, my grandmother never treated me right. Evidently I'm more mercenary; I would've cut the old girl some slack because of the centuries-old Marquess House and its fabulous research center filled with ancient documents and other treasures.

The first half of The Catherine Howard Conspiracy was extremely slow. It took too long to set the stage-- especially with Perdita and Piper, whose nicknames (Perds and Pipes)-- were over-used and drove me batty. Halfway in, characters stopped calling the two by their nicknames, and they put their shoulders to the wheel to begin piecing together the mystery of Catherine Howard. That is when the story really took flight.

I may have had a couple of other minor concerns, i.e. the Duke of Norfolk's behavior at the end of the book and the feeling that MI One seemed a bit far-fetched, but having read the entire story, I now have an idea of where book two in this trilogy is going... and I can't wait to get my hands on it.

Thriller, #1 in the Marquess House trilogy
Rating: A
Source: NetGalley