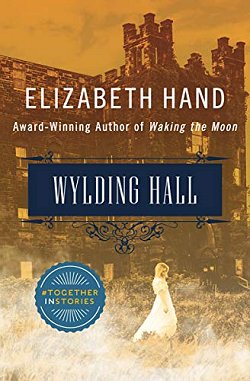 First Line: I was the one who found the house.

British folk group Windhollow Faire needs to put together their second album, so manager Tom Haring takes matters into his own hands. He rents Wylding Hall, a centuries-old manor house out in the Hampshire countryside, for the summer and effectively maroons the entire group there for the duration.

The group works on new songs, occasionally trying them out in a pub, but although the locals enjoy the music, some of the older folk warn them not to go messing about in the ancient house and grounds. Bad things could happen...

Decades later, a documentary filmmaker talks with the surviving members of Windhollow Faire-- along with their manager, friends, and lovers-- so they can tell their own versions of what happened that summer. But whose story is true? And what really happened to Julian Blake?

I think I've always had an interest in architecture. When I was in my early teens, I loved reading gothic novels, not for the stories of innocent young heroines falling in love with dark, handsome men, but for the wonderful old houses in which the books were set. I have a mental list of my favorite fictional houses and after reading Wylding Hall, I've just added another to it.

Elizabeth Hand's story is told in alternating points of view. Each surviving member of the group, the group's manager, and participating friends and lovers all share their memories of the summer they spent in the old manor house. The story unfolds, layer by layer, until the end-- which leaves you to decide what really happened.

There are times that open-ended stories are the best way to go, and this is one of them. There is a paranormal element to Wylding Hall that won't be everyone's cup of tea, but this open-ended conclusion means that each reader can interpret what happened in a way that suits them best.

I have to be honest and say that the main reason why I enjoyed this novella is because of that house. I loved it. Everyone got the feeling that the house didn't want them there. Each time one of the musicians tried to explore the oldest wings of the house (parts dating back to the fourteenth century or even earlier), they became frightened and almost completely lost. Some doors would open. Others wouldn't. Sometimes a lack of windows would make them lose any sense of direction. Were they going in circles? Could they get back to the part of the house they were familiar with? And the leader of Windhollow Faire, Julian Blake, is one of the few who found the library, filled with row upon row of books, some of them with what look to be spells and the lyrics of ancient ballads.

If you like old houses with personality and stories that let you decide what happened, pick up a copy of the fast-paced, award-winning Wylding Hall. It's a fun way to spend an hour or two.