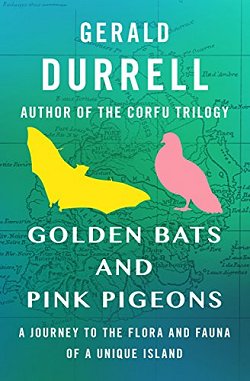 First Line: All over the world, hundreds of species of wild animals are facing extinction due to the direct or indirect interference of man.

Gerald Durrell was a force to be reckoned with in wildlife conservation, and Golden Bats and Pink Pigeons is his account of a trip to Mauritius and surrounding islands to capture enough critically endangered species to take back to his zoo on the island of Jersey to begin successful breeding programs. It's a wonderful book that was too short.

Durrell tells of his preparations and of trying to get all the supplies and everyone in his group in and out of boats and onto tricky landing spots in remote areas. A great deal of thought went into how they would trap the birds, bats, and reptiles so that they would not be injured as well as how the animals would be housed until they were ready to depart for Jersey. Each species required a specific number of animals for a chance at a successful breeding program, and Durrell and his group did not take any more than they needed. (There are records from the 1700s of ships leaving these islands with thousands of turtles and other creatures on board, at least half of which would die before they reached their destinations.)

Hunting the animals was fascinating reading which often made me laugh out loud as Durrell described travel with Jak fruit and being in a hut during a torrential downpour with land slugs and a nervous rat.

In addition to the laughter, it's the beauty of Mauritius that I will remember, especially Durrell breakfasting with birds out on a terrace and his incredible descriptions of marine life when he went snorkeling. If you love wildlife, this is a book you must read.