The Clincher by Lisa Preston 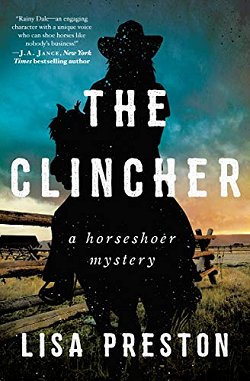 First Line: This guy was always such a faker, acting like I'd killed him, broken his leg, whatever.

Twenty-something high school dropout Rainy Dale has had a tough life so far, and she's got a lot of secrets that she wants to keep buried. But she's determined to Turn Over A New Leaf.

She's worked her way through farrier's school, tracked down the beloved horse that was sold away from her, and now she's trying to build a client base and a new life in Cowdry, Oregon-- ranching country where horses still reign supreme and all their owners need a reliable horseshoer.

But her new life is put in jeopardy when one of her clients turns up dead and she becomes a suspect. If she truly plans to put down roots in her new town, she's going to have to clear her name-- and there's a killer out there who isn't going to be happy to find out that Rainy has the attitude and determination needed to get the job done.

Picking up a mystery with a female horseshoer may sound like an odd choice, but when you love horses like I do and when a man from your little hometown was a farrier for one of the teams of Budweiser Clydesdales, the choice suddenly doesn't seem strange at all. I often say that I am a character-driven reader-- and I am-- but I also read for "voice." If the main character speaks in a way that draws me right into the heart of the story, 90% of the battle is won as far as I'm concerned. Rainy Dale has that voice. She's a Texan with a colorful way of speaking-- and I'm not talking swear words here. Rainy has sworn off using bad language; it's a part of her Turning Over A New Leaf. She's made some really bad decisions in her short life, but she's got the gumption to change all that. In The Clincher, she begins to realize that the hardest thing she's going to have to do is to change her (very low) opinion of herself.

Anyone who loves horses is bound to love this book for the equine lore alone. Even if you don't love horses, if you like learning about new things, chances are good that you'll find this book a winner, too. Horseshoeing, a sport called Ride & Tie, learning to get along with a talented chef who wants more from Rainy than she wants to give... all these things and more play parts in a strong, fast-paced mystery. Character, mystery, and setting are the winning trifecta here.

I'd barely begun reading when I knew I needed more, so I already have the second book in the series, Dead Blow, on hand, and I see that the third is scheduled to be released in September. If you love characterization and that elusive "voice" as much as I do, please give Lisa Preston's The Clincher a try.