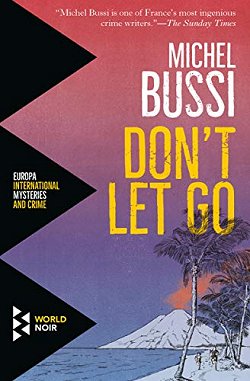 First Line: "I'm just going up to the room for a second."

A holiday at an idyllic tropical resort on Réunion Island east of Madagascar is the perfect vacation for wealthy Parisians Martial and Liane Bellion and their six-year-old daughter Sopha-- until Liane disappears from their hotel room. The room is in disarray, there's blood on the walls, the floor, and the sheets. A hotel employee swears she saw Martial in the corridor at the time Liane went missing, so he immediately becomes the prime suspect. But then Martial and Sopha disappear, and an all-out manhunt is in force across the island. Is Martial Bellion really a killer?

I picked up Don't Let Go because the premise sounded intriguing and because I'd never read anything set on Réunion Island which is east of Madagascar. I got a good feel for the location in terms of landscape, weather, and its rather complicated social history, and that's always a plus for this armchair traveler. Another plus is that the book satisfies more than that one reading necessity.

The point of view switches back and forth from the local police captain to her second-in-command to the prime suspect to his daughter and to perhaps my favorite character, Imelda, the mistress of Christos (the second-in-command) whom he calls the black Miss Marple. This changing point of view keeps up the fast pace, and it certainly keeps readers guessing. I was very pleased to discover that the characters were more fleshed out than in a typical thriller and that they didn't always behave the way I thought they would.

The plot is the sort that you really can't say much about without giving things away, but I will say that I did enjoy myself working out exactly what was going on as Bussi divvied out a morsel of information at a time. In fact, I enjoyed myself so much that I'm going to be on the lookout for more books by this author... even if he does wax a bit too poetic when writing death scenes.