The Stolen Letter by Paige Shelton 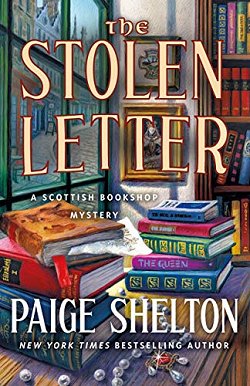 First Line: I must really love my job.

One day after returning from her European honeymoon, Delaney Nichols is headed right back to work at The Cracked Spine, a bookshop right in the heart of Edinburgh, Scotland. As she hurries to get into the shop, she and another woman run into each other, and they're both in for a surprise. The other woman's name is Mary and both women can't help but see that they look a lot alike. Mary thinks they both look like Mary, Queen of Scots, the monarch that Mary believes she is the reincarnation of.

Delaney doesn't have time to ponder the strange encounter because when she enters the bookshop, she learns that the Edinburgh city council has cited The Cracked Spine with code violations and wants to shut the business down. Delaney is determined to stop them, and when Mary's husband is killed by a car bomb, she finds out that he was the member of the city council who began the entire process of closing the bookshop. Was her meeting with Mary an accident or planned? Delaney will not rest until she gets to the bottom of the mystery and saves her beloved bookshop.

Paige Shelton weaves the history of Mary, Queen of Scots cleverly into a very puzzling mystery in The Stolen Letter, the fifth in her Scottish Bookshop cozy series. The mystery is particularly strong in this book, and I really enjoyed myself trying to figure out what was going on and the identity of the people responsible. I was a bit disappointed when the mystery shifted focus to Henry and Mary's past life was rather abruptly abandoned, but then I thought about it and realized that there was really nowhere for that particular plotline to go.

I do have to admit to a chuckle or two when it became blindingly obvious that Delaney was much more interested in saving the bookshop than she was in finding the dead man's killer, but-- as most readers will realize-- the two are connected and the tie between the two is one of the things that makes the mystery in The Stolen Letter so good. Shelton has a winning combination with her characters, setting, and stories, and I certainly look forward to Delaney's next adventure.