Hid From Our Eyes by Julia Spencer-Fleming 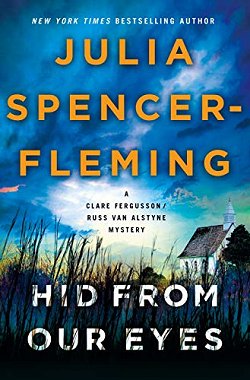 First Lines: August 20, 1952. He had parked his cruiser in the muddy verge of the country highway, a little way from the circus that was going on up the road.

Millers Kill Police Chief Russ Van Alstyne responds to a 911 call to find that a young woman in a party dress has been found dead in the middle of a road outside town. When there is no obvious sign of death, Van Alstyne immediately thinks of a crime in 1972 with the identical MO-- a crime of which he was accused. When it is learned that yet another identical crime was committed in 1952, the pressure is on Russ to find the killer before he's removed from the case.

These three cases may seem identical, but how can one killer be responsible for crimes that span sixty years? Russ is going to need every bit of help he can get-- from everyone in the police department to retired police chief Jack Liddle to his wife, Reverend Clare Fergusson, who is already juggling the tasks of being a new mother to Russ's baby and running St. Alban's Church.

It's been a long wait for Hid From Our Eyes, but it was worth it. In my opinion, Julia Spencer-Fleming's cast of characters ranks right up there with those in Elly Griffiths' Dr. Ruth Galloway series. As far as devoted readers go, Russ and Clare and Hadley and all the rest have become friends, and we have to feel a part of everything that happens to them as well as "helping" them solve a mystery. We are most definitely invested.

Russ is really under the gun here. Not only does he have this very puzzling crime to solve, but a vote is also coming up to determine whether or not the Millers Kill police force will be disbanded. He feels as though he's coming up to a crossroads in his life. Clare herself is still fighting her own demons and has given herself the added pressure of trying to be the world's best mother and cleric. The decisions these two make by the book's end may not be to everyone's liking, but they feel real.

How's the three-pronged mystery in Hid From Our Eyes? It was a real head-scratcher for me until one specific thing was described about three-quarters of the way through the story. That's when the light bulb finally went off over my head and it was just a matter of my waiting for the characters in the book to figure it out for themselves.

Readers who loathe cliffhangers in their books are going to have something to wail and gnash their teeth over in Hid From Their Eyes. I know there are many of you, so prepare yourselves. As for me, I'll just look forward to the next time I see Russ and Clare. They are two of my favorite characters in all of crime fiction. Welcome back, Julia Spencer-Fleming!