The Stationary Ark by Gerald Durrell 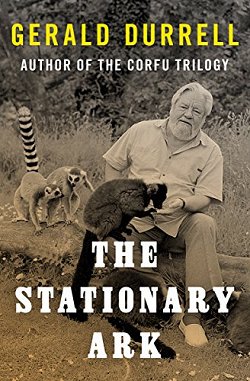 First Line: This is a book about zoos in general, and one zoo in particular-- the one I started on the Island of Jersey.

"Zoo" was the first word Gerald Durrell could enunciate clearly, and if his nursemaid deviated from their daily walk to the local zoo, he would throw a tantrum. Years later, Durrell set up the Jersey Wildlife Preservation Trust, and he didn't want it to be like any other zoo. His writing was one of the primary ways he financed his zoo.

The Stationary Ark is a quick yet fascinating read, all about Durrell's experiences and opinions of what a proper zoo should look like and what it should be doing. First published in the 1970s, Durrell doesn't hold back on his opinions, such as that most zoos of the day were a disgrace. Zoo design, to him, should consist of four things in strict order of importance: (1) the needs of the animal, (2) the needs of the person looking after the animal, (3) the public who wish to see the animal, and (4) the aesthetic aims of the architect and of the gardener who has to tend it. Most zoos, Durrell believed, had those four priorities in reverse order. He also believed that a zoo's primary function should be in the areas of conservation and research, not of entertaining the public. And don't even get him started on the subject of safari parks! No, he didn't hold back with his opinions, but he also didn't name names-- which made me wonder if I've ever visited any of the zoos Durrell had low opinions of.

But The Stationary Ark isn't just about Durrell's opinions. He shares how he started his own zoo on the Island of Jersey-- how he obtained animals, how he transported them to the zoo, how the animals were taken care of when they became ill, etc. One thing I'd never realized is how little was really known about almost any animal in a zoo because no research was available and because for so long zoos kept no records of the daily care and feeding of their animals. (If the animal died, they could always send someone out to get another from the wild.)

This is a fascinating little book that I'm so glad I read. Now I want to learn how present-day zoos stack up against Durrell's criteria-- criteria that put the needs of the animals front and center where they should be.